The Oil Industry in Basra 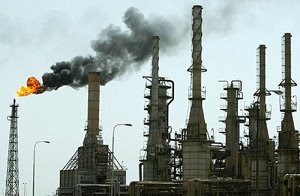 In the item I posted yesterday, I reported on the TUC's condemnation of the Iraqi Government for their anti-Trade Union activities. The TUC made five specific claims about the role of the Iraqi Government. The final one was that they are "Relocating leaders of an Iraqi oil union specifically to disrupt the union which has consistently opposed oil privatisation".

The Iraqi Trade union concerned is the "General Union of Oil Employees in Basra". It has itself published a statement which elaborates on the situation. This commences -

They used to work at the Oil refineries in the south. This act represents the minister's anti-union policy, and lack of respect for Unions and Unions' activists in the Oil sector.

Those activists, through their hard work, are well known for fighting corruption and corrupt-ministry gangs in the Oil sector.

They have been transfered to Baghdad Al-Dorah neighborhood (known for worsening security situation, and high level of sectarian killings) .

In the context of Iraqi security situation such a transfer is rightfully regarded as Human rights crime."

See here for the statement in full.

My own fuller coverage of the Trade Union situation in Iraq appears here.
Posted by Harry Barnes at 7:32 PM