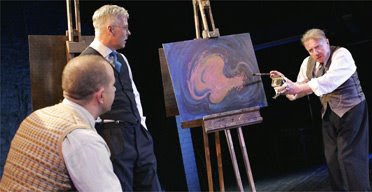 Peter Ryley is an Adult Education Tutor at the Centre of Lifelong Learning at Hull University. In discussing Lee Hicke's play "The Pitmen Painters" about a group of Miners who develop their artistic talents via a Workers' Educational Class in the North East, he draws on a report by Madeleine Bunting in the Guardian.

Whilst praising her report, he adds this important consideration. It is worth quoting at length -

"There is one thing missing though. She has failed to spot the threat to the very instrument of the recognition and development of the miners' talent; a national, independent adult education service. This service was delivered by a number of diverse bodies, the WEA, University responsible bodies, local authorities, the residential colleges etc. It was able to exist without restrictions on who could participate, whether they had to study for a qualification or not, and gave tutors and students a degree of autonomy that would be unthinkable today. This is not to say that the system was perfect and that there was no room for reform, but changes over the last twenty years have led to the disappearance of much of its work and a severe restriction on its autonomy. One wonders whether an equivalent group to those miners could be supported today.

Adult education still exists, but the last two years have seen the shedding of no less than one million four hundred thousand funded places. The heavily criticised proposals on restricting funding for students who wish to take qualifications at an equivalent or lower level to one they hold already is having a devastating impact on an already diminished university adult education sector. Though successive governments have shied away from delivering the final coup de grace, death by a thousand cuts is in no way preferable.

Universal adult education was never simply a middle class indulgence, as some stereotyped it. It was, and remains, a source of community cohesion and individual achievement, a lifeline for vulnerable people and a route for social mobility. Something special is dying. It is an unnecessary act of cultural vandalism. The Pitmen Painters is a reminder of the value of what is being wilfully destroyed. I hope it can be saved, otherwise the idealism and energy of a new generation will be required to rebuild it from scratch."

I was also an Adult Education Tutor at Sheffield University from 1966 to 1987 and had the privilege of sharing in the tradition which Peter describes and which has since suffered from a thousand cuts. South Yorkshire and Derbyshire Miners formed the backbone of our classes. I only once ran a session on paintings, when a miner brought his work and discussed it with us. Our classes were in the area of political economy, although we then enjoyed the advantage of being able to roam wherever our intellectual interests took us.

I still try to keep the flag flying. On Friday, for instance, I am off to Wortley Hall to take a class of Norwegian Trade Unionist who are looking into Globalisation. There are no prizes for guessing my topic for discussion - "The Iraqi Trade Union Movement".

Postscript From Peter - Sign Up To Save Adult Education
Posted by Harry Barnes at 12:10 PM

Perhaps its appropriate to quote Iran's Homer, Ferdowsi, a 1000 years ago:

'Seek knowledge from cradle to grave'

Azarmehr: Peter (the plump) above teaches in a Department whose title has a commitment to Ferdowsi's concept - i.e. "Centre of Lifelong Learning". The Department I was in was renamed as "Continuing Education" and we attempted to study as equals with the students; discovering and learning with them. There are numbers of Labour MPs who emerged from this tradition, including John Prescott who (like myself) went to an Adult Education College which in our times was fully part of the tradition which Peter descibes on his blog. Unfortunately, numbers of my former colleagues seem to have forgotten about this heritage.

You do well to remind us that the search for knowledge is a world wide idea which needs world-wide application.

any chance of you posting on the procedure for a by-election (as with David Davis)?

Modernityblog: I will have to look it up. Although I did see Edward Fox in a play about it once. But it was never on my political agenda!

Modernityblog: I have recently posted on the Bye-election situation. On the Chiltern Hundreds, David Davis just asked for the post from the Exchequer. They then removed the last occupant from the list, who was Tony Blair. Davis is then sent a letter of confirmation in which they dropped the MP from after his name. Details of his appoinment are published in the London Gazette and in Parliament's "Votes and Procedures". They should appear in Monday's edition of the latter, as the Commons did not sit on Friday the day after Davis "resigned". His name can now be taken from the Chiltern Hundreds at any time that is convenient to the Treasury or himself. This is how 17 Ulster Unionists managed to resign over a day. They also, however, made use of the Manor of Northstead post which Boris was appointed to in order for him to "resign". It is all in Wikipedia.