When Will David Davis Actually Resign?

See Updates at the close -with No 8 they are now ended. 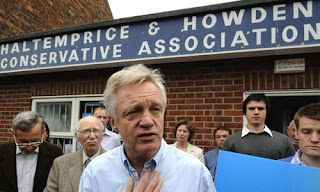 Has David Davis yet applied for the Chiltern Hundreds (as a means of resigning from the Commons) and has it been granted to him under the seal of the Chancellor of the Exchequer? If these matters had been covered either on Thursday when he made his dramatic announcement or on Friday before the Commons went into its weekend break, then by now they should have been published in the Commons's "Votes and Proceedings" - but nothing has emerged.

Of course, he could have applied but it is Alistair Darling who is dragging his feet about issuing this stewardship. The Chiltern Hundreds have even been refused in the past, as in 1775 and 1842. But I doubt whether Alistair Darling would do anything so dramatic. But if alternatively the matter was to be dragged out and a motion to issue a writ for a bye-election in Haltemprice and Howden is not carried in the Commons before it goes into recess on 22 July, then no such writ can be issued until the Commons then re-assembles on 6 October. No bye-election could then take place until November at the earliest.

In the item I posted yesterday, I claimed that the bye-election would take place on the 10th or 17th July. This could still happen, but during this Parliamentary week it requires (a) the Chiltern Hundreds to be transferred to David Davis from the current owner of this stewardship (Tony Blair) and (b) the writ for the bye-election to be moved in the Commons (traditionally) by the retiring member's Chief Whip and the motion to do this then carried. The latter could give further scope for a debate on the 42 days issue, but without the participation of David Davis.

In order to resign from the Commons, Boris Johnson took the alternative stewardship of the Manor of Northstead. Once these stewardships are taken up, they perform their task of ending the holder's tenure as an M.P. They can then be taken back by the Exchequer as required or handed back by the recipient. Using only the two stewardships, this is how 17 Ulster Unionists were able to resign in one day on 17 December, 1985 and force a mini General Election in Northern Ireland.

It should be remembered that George Lansbury took the Chiltern Hundreds in 1912 in order to fight a bye-election on an issue of principle. He campaigned for votes for women and was rejected by the male electorate. It took him 10 years to get back into the Commons, but he did nevertheless go on to become the leader of his political party, but only after it had been decimated in the 1931 General Election. Will it be the same for David?

Thanks to Pete for raising this problem with me.

Update 3.35pm, June 16 When Boris Johnson resigned from the Commons on 4th June, this is the item which appeared in the Commons's "Votes and Proceedures" the following morning - "Disqualification of a Member,—The Speaker laid upon the Table a notification, That Mr Chancellor of the Exchequer had this day appointed Alexander Boris de Pfeffel Johnson, Member for Henley, to be Steward or Bailiff of Her Majesty's Manor of Northstead in the County of York." What we now need to know is whether a similar notification has been tabled by the Speaker on behalf of David Davis at 2.3Opm today. If I was still an MP, I would just slip into the table office to find out. Unless I can get one of my former colleagues to do this, I may have to wait to check this out in tommorrow's "Votes and Proceedings".

Update 4.59pm, June 16 A further source for the announcement of an appointment to the Chiltern Hundreds or to the Manor of Northstead is via a Treasury Press Release. This has not yet happened for David Davis, but it occurred for Boris Johnson on the same day the Speaker "tabled" the information - 4th June. It is now over 4 days since Davis announced his intention to resign. Is he having second thoughts?

Update 10.57am, June 17 Here is a claim that David Davis will seek to get called during PM's questions tomorrow and will afterwards apply for the Chiltern Hundreds. The writ for the bye-election would then probably be moved on Thursday, if the Tory whips play ball. The bye-election is then likely to take place on 17 July.

Update 6.05pm, June 17 There is even more confusion. David Davis has now set up a new blog in which he says - Welcome to my campaign to preserve our fundamental freedoms. On 12 June, I resigned from Parliament (my emphasis HB) to take a stand against the sustained assault on British liberty. I resigned after the vote on 42 days, because it marked a watershed. Prolonged detention without charge undermines a fundamental liberty. But it also likely to prove counter-productive – with a range of security experts warning of the security risks presented by this draconian measure. I do not believe we can defend our security by sacrificing our liberty. So does he really believe he has already resigned from the Commons? Or is he deliberately telling a porky? Or is he just confused? From what I know of him, I go for the last option. At the moment, his old blog says that he is still an MP. And indeed once he is no longer an MP, it will be illegal for him to claim that he is one. I'm not sure if it is illegal to say that you are not an MP when you are one!

Update 6.38pm June 17 The error claiming that he has resigned from Parliament has now been spotted on the new David Davis blog. It now reads - "On 12 June, I announced my intention to resign from Parliament" But the wording of this on a side-bar (and in two other places including his profile) has not yet been changed - although it might be by you click into it.

Update 9.00am June 18 Doubt is now thrown on the standing of the new David Davis web-site. It is claimed that "it does look like Davis’ campaign url was registered by an employee of a PR company, headed by someone who thinks ID cards are fucking ace, and subsequently re-registered to Davis’ name and address only today". I am not myself in full opposition to ID cards as I believe that if they were adapted they could be used for socially useful purposes which go way beyond those of security. Nor would I use the f-word. But this is another sign that David Davis is this very confused person. Thanks again to Pete for the link.

Update 9.30am June 18 If David Davis remembers to turn up, stands up and is called by the Speaker to ask a question; then he will ask what is assumed to be his final Commons' question prior to his resignation. This will be to the Prime Minister at some time between noon and 12.30pm. To see if he remembers his lines you should then click in here.

A Final Update 2.10pm June 18 David Davis finally moved to take the Chiltern Hundreds this morning, in time for him to no longer be a member of the Commons by Gordon Brown stood up to answer Prime Minister's Questions. So why did he make us wait 6 days for him to take this promised action? He also then immediately resigned the post when it had served its purpose of removing him from Parliament.

We now await the move in the Commons of the writ for the bye-election. I assume that this will be done soon in order to seek to enable the polling day to fall on 17 July. All that remains to see is that when the writ is moved will some MPs seek to run a filibuster against the proposal and/or call for a division to seek to stop it? If the writ isn't issued soon, then it can't be obtained until after Parliament's Summer Recess and the bye-election will not be possible until November. By then circumstances could arise which could lead to David Davis losing. But I expect that 17 July will be accepted by the powers that be.
Posted by Harry Barnes at 11:41 AM

Second thoughts Harry? Surely not - he couldn't be that hard-faced could he? I suppose he could say that he was only resigning to create a national debate (which is indeed what he said) and that since Labour were too scared to debate with him, there was no longer any point.

But really, he'd make a complete laughing stock of himself wouldn't he?

Couldn't be holding out for a more high-profile time, like the conference season or something could he? Anything coming up?

Pete: I expect him to stay with his proposal. But he might be getting some stick inside the Tory Party. He needs to get their Chief Whip to move the writ for the bye-election soon after he takes the Chiltern Hundreds. If they let things hang on, it will be a snub. Perhaps he is trying to get agreement on this before he makes his own move. If the writ isn't moved by next Monday at the latest, then he won't obtain a bye-election before the summer recess. And it would be unusual to have a bye-election during the recess as he could not become an MP until Parliament re-assembled and he could take the oath. And if he holds on too long, then the 42 days could then be law - although he could try to lead from the back-benches against it.

Whilst I oppose the 42 day proposal, I always found Davis to be poor quality stuff. When he was the Tory Minister for Europe, he was pathetic.

Guido claims DD "is going to wait until after PMQs to jab a question to the clunking fist before he stands down as an MP".

rewendland: that should make the bye-election on 17 July, unless the Tory whips refuse to play ball.

I think you're right on the money with PM's Qs. There's no way he can resist a parting shot.

And Davis' new 'forfreedom' site may turn out to be the most significant thing of the lot - that name was first registered by a PR company: see Famous for 15 megapixels . Just when they registered it isn't clear to me, but they're obviously involved, suggesting the spontaneous eruption of righteousness was possibly pre-planned. As damagingly, the firm he's picked have done some serious work for distinctly anti-libertarian organisations.

Of course any expenses prior to the bye election Writ do not count as election expenses - cost of flashy website, PR bullshit campaigns etc etc.,

And why should PM give him has chance at PMQ's ? A quiet word in the right ear ...

I'm not sure which Ziz that is, but if David Davis jumps up I bet the Speaker will eventually call him. He loves what he sees as parliamentary events.

What are the rules on election expenses? Given that the dog didn't bark at PMQs, could he have been stalling to get some expensive spending out of the way - PR/marketing/web-building - before his e;ection campaign started?

Pete: the expenses aren't counted as far as I know until he is officially recognised as being a candidate by the Returning Officer - for the timetable see my previous thread. At one time to avoid earlier "expenses" a legal fiction had to be adopted of calling oneself a "Prospective Parliamentary Candidate". They got rid of this requirement, however. So he seems to be in the clear until he is officially recognised as the candidate.

Once more you have probably hit the nail on the head.