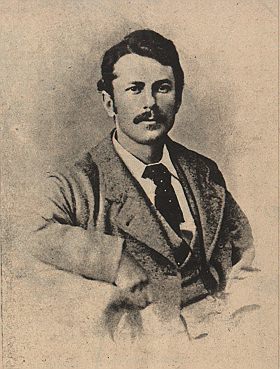 Edward Carpenter lived from 1844 to 1929 and became a prominent socialist, poet and writer who wrote many books and lectured across the country, whilst being based at his home at Millthorpe from 1883 to 1922. He lived close to my own home in nearby Dronfield. He also involved himself in Extra-mural teaching at Sheffield University, where I also taught from 1966 to 1987.

Though efforts have been made to remember Edward Carpenter, his important writings have largely been forgotten. Even in neighbouring Sheffield it is not possible to walk into a book shop and buy  copies of even his most famous works. However, one can easily purchase a copy of Walt Whitman's Leaves of Grass, the poem that inspired Carpenter to write Towards Democracy.

Typesetting for a new edition of Towards Democracy is now. however, largely completed.  All that is needed is money to pay for the printing, and to launch a relevant co-operative so that it can continue via its members' involvement onto further projects.

For further details about this project and how you can support it, link here to see the work being undertaken by Millthorpe Press which is a key co-operative that will be largely led by its members, who will have a vote in further publications by the co-operative, as well as receiving a newsletter, and invitations to stand for its board. Your involvement and support would be most welcome.

For more information about the importance of Edward Carpenter click here and much more can be found by googling. There is a valuable article about him click here.

HAT TIPS to Michael John Hattersley and Mick Walpole of "Dronfield Through Time". Here is a photo taken in the early 1900s on the main Sheffield Road through Dronfield with Edward Carpenter in the centre -

Posted by Harry Barnes at 2:35 PM No comments: