Great news - Jacob Rees Mogg the MP in charge of Fracking has resigned as Business Secretary. Hopefully this indicates that fracking will bite the dust.

28 October sees the return of controls on fracking. See - https://drillordrop.com/2022/10/28/igas-hints-at-legal-action-as-government-issues-new-wms-on-fracking-moratorium/#respond Posted by Harry Barnes at 2:45 PM No comments:

See this House of Commons Library Briefing Paper published on 31 March 2020. It reveals the serious dangers fracking can lead to especially in former built upon Coal Mining Areas such as the one in the item below this one. Link into https://researchbriefings.files.parliament.uk/documents/SN06073/SN06073.pdf

Posted by Harry Barnes at 3:46 PM No comments:

Dronfield Eye published the following article from me in March 2019, issue 161. You will need to click onto it to enlarge it, so that you can read it. Although it makes no mention of fracking dangers in the Dronfield area, the information it provides shows just how serious fracking operations would be in the territory it covers. For Dronfield and its surrounding area is pock-marked with several hundred former coal mining operations, many of which now have houses, gardens, roads, shops and public buildings  built on top of them. As mining operations in the area took place between the 16th Century and the 20th Century, there will be additional areas where coal mining took place yet they have not yet been indentified. Fracking such territory would create major safety problems. There can hardly be an area where fracking operations would be more harmful.

The Coal Authority holds a similar map for the whole of North East Derbyshire showing an overall spread of past coal mining operations. I do not, however, hold their permission to publish it. 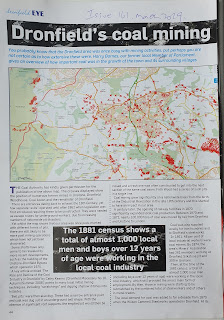 Posted by Harry Barnes at 4:46 PM No comments: