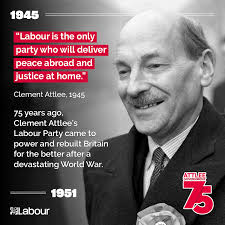 From last year.
One of the duties of those of us who see ourselves as being Democratic Socialists is to spell out how we see our beliefs being advanced within the political structure we now find ourselves to be placed in. Yet in the territories which are represented in our own parliament we have some initial complexities to face. One problem is that many local people advocate independence for Scotland and Wales; whilst there are many in the Catholic community in Northern Ireland who favour the establishment of a united Ireland.
Without pursuing a policy of persistent referendums for such areas, it seems to me to be realistic to accept the current constitutional arrangements for the immediate future. For now, the key matter that needs to be resolved is overcoming the block on trade which has been placed between the United Kingdom and Northern Ireland following our departure from the European Union.
There are also two other key democratic problems we need to confront. First of all, what should we do about the House of Lords ? There seems to me to be a case within our
complex political structure for having a second revising Chamber, but not one appointed as now  by what are passing Common's hierarchies. Major interest groups in society (including  trade unions and welfare groups) could periodically appoint what are now Peers. Their purpose being to analyse Commons legislative proposals to see if improved ideas can then be reconsidered by the Lower Chamber who have got the final say.
There is also the question of the nature of the overall electoral system. Should we for instance introduce proportional representation ? Here much seems to me to depend on its format. If we had separate PR systems for England, Scotland, Wales and even Northern Ireland; these would all give considerable power to the centralised political party machines to decide the batting order for the candidates who were finally elected.
Instead I favour PR in smaller areas of no more than ten seats or so. The boundaries to be determined by their local interconnections. With parties deciding the batting order of their candidates locally. Plus each candidate having local links - such as living in the area or having spent a fixed period of their teenage/adult life there.
Facilities for voting should also be expanded and not just be restricted to those with technical proof of who they are. The system should facilitate such checks and not require specialist material from the voter.
We need arrangements which take power away from internal centralised controllers,
plus a democratic structure to determine overall Labour Party policy. Key issues should include (1) tackling climate change, (2)  lifelong learning, (3) proper and reasonably paid jobs for all, (4} decent and non-exploitive housing, (5) overseas aid and (6) international aid and assistance. Whilst, of course, tackling covid at home and abroad.
Posted by Harry Barnes at 2:01 PM No comments:

I was born at Easington Colliery in County Durham 85 years ago today in 1936. Five days after the start of the Spanish Civil War. My father being a miner at the local pit. He lived there all of his life from when he was 2 years old. My mother having moved into the area when she was 20 having been a domestic servant. I first became aware of electoral politics at the time of the 1945 General Election - See http://threescoreyearsandten.blogspot.com/2020/06/75-years-ago-today-my-introducation-to.html

When I left school at 16 I became a railway clerk. At 18 I was called up to undertake my National Service, serving with the RAF in Iraq in a Movements Unit where I worked closely with Iraqi State Railways. The harsh conditions which I saw that many Iraqi people lived in gave me a deeper interest in politics, which was added to when as I was being demobbed due to the impact of the Suez Crisis with Britain (against my stance) involved in the invasion of Egypt.

Over the year after my demob I wrote political letters which appeared in local newspapers. I then joined the Labour Party and soon became the Easington Colliery Branch Secretary. A Fabian Society was then established at nearby Peterlee and I became their Secretary also.

At the age of 24 I obtained a place for full-time study at Ruskin College in Oxford. The course lasted for 2 years and led to my obtaining a diploma in Politics and Economics. This gave me the qualification to then study for a Politics and Philosophy degree at Hull University.

Between my first and second years studies at Hull I married Ann. We met 2 years earlier in Sunderland where I had returned to work as a Railway Clerk during the summer vacation and she worked nearby. She lived at Shotton Colliery near Easingyon, her father also being a coal miner. Ann and I moved to Hull following our marriage.

On graduation my first job was lecturing at a college of Further Education in Workshop. Then the following year I obtained a place at Sheffield University Extramural Department and Ann and I moved into a University flat. After 2 years our son Stephen was born.

In 1969 we bought a house in Dronfield in Derbyshire just over the southern border of Sheffield.  It was an area we knew well from our time in Sheffield. For a collegue of mine at the Extramural Department was Karl Hedderwick. We had studied together at Ruskin and he had been best man at our wedding. He already lived in Dronfield so we got to know his friends in the local Labour Party even before we moved in ourselves. After three years of moving into Dronfield our daughter Joanne was born.

In Dronfield I further developed my links with their Labour Party and its parent body - the North East Derbyshire Constituency Party. Serving as their MP from 1987 to 2005. Ann and I moving into our current home in Dronfield in 1984 from which Ann came to run our constituency office. For constituency meetings I produced 121 written reports of my parliamentary activities, plus a final summary of the whole period. These substantial reports also contained extracts from my contributions in Hansard,  press coverages and other relevant material.

On retiring from parliament I became involved in Political Education activities in the North Derbyshire area. This included organising over 140 discussions meetings for the Dronfield Labour Party. A role now taken over by Rosie Smith.  In the Covid period a couple of the meetings have been held in our garden.

Hopefully my ealier educational commitments to the study of politics meant that my subsequent parliamentary activities were questioning rather than dogmatic.

Our son lives in London being married to Rebecca who originates from Australia. They have two childen.  Joseph aged 16 and Amy aged 14. Whilst our daughter Joanne is in Bournemouth with her partner Andy.  Covid and old age have hit our visits to see them recently, but luckly not for them to see us. Stephen, Joseph and Amy are due to visit us today.

In parliament some 20 years ago.

Posted by Harry Barnes at 7:31 AM No comments:

This is a link to 50 clear cases where Jeremy Corbyn acted in opposition to anti-semitism. Do they not fully outweigh the examples which are used against him ? So why is he still expelled from the Labour Party ? See -

I ask this although I never voted for him as leader. For I felt that the left needed to adopt a more gradual approach, so that it could then eventually come to exercise major and continuing political influence. Events since his initial election have since confirmed this requirement.

Posted by Harry Barnes at 5:07 PM No comments:

The NHS - Many Happy Returns and Sound Support

The National Health Service was established 73 years ago today by the post-war Labour Government,  just a few days before my 12th birthday.  I was then very early to benefit by this fine arrangement.  For shortly afterwards I was taken into an NHS Hospital in Sunderland for treatment for tonsils and adenoids.  Although today the NHS needs more Government backing and support, we would be in a bad way without it in seeking to tackle Covid. In fact my only stay in hospital since 1947 was again under the NHS when I had a stroke as an MP when  in the Commons. The Deputy Speaker helped to rush me across to St. Thomas's. I was then taken into much the same area where Boris Johnson was recently dealt with for Covid. We could do with signs that it has also given him a committed to the NHS, especially as far as its wages and current finances are concerned.