I am very sorry to hear about the death of Michael Martin who was a former Speaker of the House of Commons for a period when I was an MP.

A huge personal debt I owed to him is explained in this item which I placed on this blog back in 2009.
Posted by Harry Barnes at 8:59 PM No comments:

Does The Left Have A Jewish Problem ?

A problem which I am seeking to pay attention to is whether anti-semitism has become a matter of significance within the Labour Party, especially with (and around) the election of Jeremy Corbyn as our leader. It is a matter I hope to return to in the future.

Within the last 18 months or so, I read Dave Rich's book "The Left's Jewish Problem : Jeremy Corbyn and Anti-Semitism". I made some notes of it at the time and slipped the following comment inside the copy I hold - now slightly tweaked. Did I say anything of significance or just get hold of the wrong end of this slippery stick?

In criticizing Dave Rich's book, I need to point out that I never voted for Jeremy Corbyn for leader - making a positive abstention in the second vote. And amongst a number of reservations I had about Jeremy was his rather uncritical links with Hamas. Although I now feel that Jeremy has adjusted his stance in numbers of the areas of my concern and I would certainly not favour a further leadership contest at this stage, nor a gang-of-four type split. When confronted by two extreme viewpoints, it can sometimes be helpful to seek to transcend these by working for a synthesis - which is more than a surrender or a compromise. This can be done (in this case) without people being involved in a sell-out of their basic values. 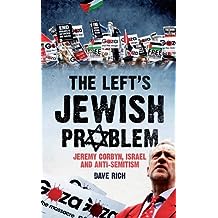 "One page 236 of his book, Dave Rich states that the "left is divided between those who identify with Jewish aspirations for nationhood and oppose anti-Semitism as part of their anti-racism, and those who oppose Israel and Zionism for exactly the same reason". This conclusion is typical  of his wider approach, where he argues for the first position.

Yet don't many of us fall into alternative positions - not just one of these two extremes? Including those of us who were highly sympathetic to the needs of Jewish people to share a safe and common homeland (especially given our knowledge of the Holocaust), yet also have concerns about the problematic impact which the establishment of Israel had for many Arabs throughout Israel and Palestine. The resulting conflict between, say, Hamas and Israel being something many of us are keen to help to transcend via, say, a two-state solution. Just as many of us have been associated with moves to peace and reconciliation in Northern Ireland/the Irish Republic, we have the same approach in relation to Israel/Palestine.

The fact that many of us have feelings of concern about the treatment of Aborigines in the formation of Australia and of Indians in the formation of the USA, does not mean that we feel that these nations should not be fully recognized in international law. Yet we can also still currently criticize moves made by such nations on whole hosts of current matters.

In the first words to the Forward of his book, David Rich indicates that his work is based upon a PhD which he has recently acquired. I have not come across a full link to his thesis, but I would be keen to access it. For I find it hard to believe that he would gain a Doctorate based on the one-sided analysis of his book - as readable and as itemised as it is. For academics usually insist on the dialectics of debate within a thesis, before awards are granted. (Although I admit I have never attempted one). Surely, this is necessary even when one goes on to draw conclusions in an academic analysis which finally come down solidly on one side. Academics (and the rest of us) also need to put their opponent's cases at its most plausible, if they then wish to cap it. In his book Dave Rich does not really attempt this. Yet as John Stuart Mill pointed out, a person who only knows their own side of the case knows little of that."

For the Commons' Debate related to this issue on 17 April   - Click here.
Posted by Harry Barnes at 6:26 PM 8 comments: