The Coal Authority Interactive Map can be found via this link. You can use it to search for areas where coal seams have been discovered, including many which have been excavated in the past and where seismic activity (from say earthquakes or underground fracking operations) could lead to subsidence. Many of these areas have since been urbanized, so that seismic disturbances and other forms of ground instability can lead to subsidence beneath built-up areas such as homes, gardens, shops, public buildings, roadways and pathways. We can do little about earthquake dangers, but we should place a block on future fracking operations which will invariably be sort in areas with shale gas and thus linked to the existence of past or remaining coal seams.

As shown below, the first Coal Authority Interactive Maps shows past and remaining coal seam areas throughout England, Scotland and Wales. You can then (via the Interative Map) home-in to the specific area which interests you. So that, for instance, my second map (to its east) shows the largest combined area of all, with Sheffield near its centre. Via the Interactive Map, specific areas can then be homed into such as the Bramleymoor Lane site being targeted by INEOS near Marsh Lane in Derbyshire.

By then using a list of categories shown in the indexes in the top right corner of the Interactive Map, a wide range of different categories can then be found for the area you have chosen to examine covering items such as Mine Entries, Development High Risk Areas, Underground Workings, Past Shallow Mine Workings and Mine Entry Potential Zones of Influence. Even the red crosses showing the Mine Entries can be clicked onto to see if the Coal Authority holds further details for a specific site, such as the depth of a former shaft. People will often be shocked by the numbers and shallow depths of former workings in their vicinity.

Unfortunately, it will often be unhappy hunting - showing that granting licences to fracking firms is highly dangerous. This is something the Coal Authority should be telling us from the quantity of the information they hold. Their silence is deafening. 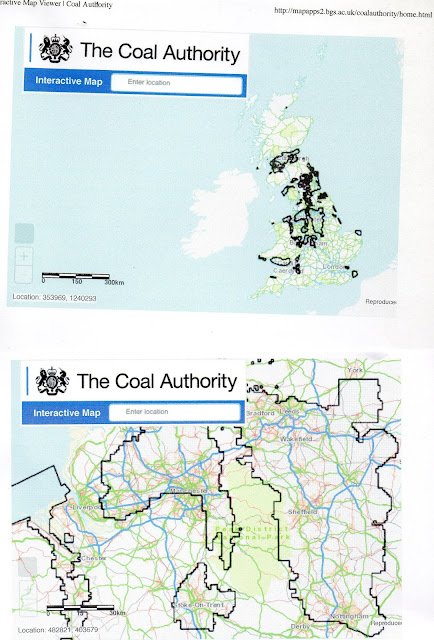 Posted by Harry Barnes at 12:49 AM No comments: