Prisoners and Voting - Yesterday in Parliament

There were two grounds on which MPs could have voted yesterday against the motion in Commons on “Voting by Prisoners”. The first of these was to uphold the right of the European Court of Human Rights (ECHR) to determine what the position should be. The second was out of a belief that prisoners should have the vote. It was, of course, possible to have voted against the motion whilst holding to both of these positions.

Unfortunately, in the absence of many Labour MPs in the Chamber the debate was dominated by Conservative MPs who were opposed to the general role of the Court and also were strong critics of the EU (although the ECHR isn’t an EU institution.) The few people who opposed the motion mainly defended the ECHR, so the coverage of the issue of whether prisoners should have the vote was only thinly dealt with.

With the addition of the tellers for the “No” vote, only 24 MPs voted against the motion. 10 were Lib Dems, 3 Welsh Nationalists (PC), 1 Green, 1 Conservative (Peter Bottomley) and only 8 were Labour – only 3 of whom who spoke in the debate (Kate Green, Yasmin Qureahi and Jeremy Corbyn).

I find the general failure of Labour MPs to give serious consideration to franchise rights to be highly disturbing but not surprising. The list of Labour MPs who supported opposition to the ECHR and prisoners voting rights is particularly worrying. 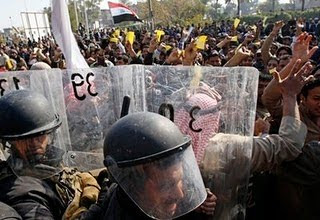 Protests in Iraq inspired by events in Tunisia and Egypt - see "Musings on Iraq". The photo shows the situation in Basra.
Posted by Harry Barnes at 5:41 PM 3 comments: