Is This Frackings Greatest Danger ? 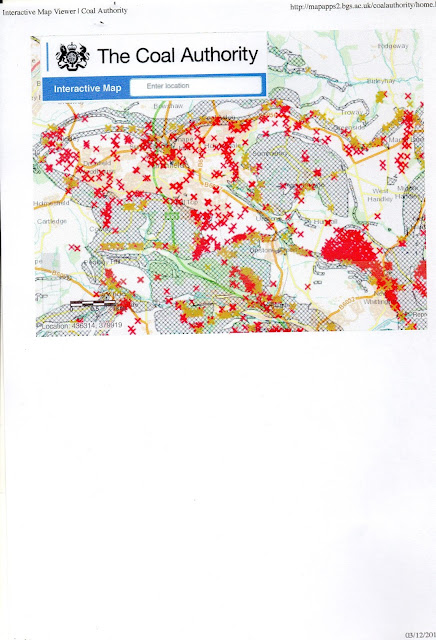 I refer to this map later. Although if you have more technical skills than I do, it would help if you could enlarge it. Then if you would like to find a similar map for other areas threatened by frackers, this article explains how you can do that.

There are numerous inconveniences and dangers which we face from fracking. Yet it is the problems which arise in former coal mining areas which worry me the most. For where there were (or still are) coal seams this provides key territory for finding shale gas. Yet fracking in such areas will create serious dangers and instability.

A key avenue for discovering where these problems are likely to be is provided via the Coal Authority. You need to turn to their "Interactive Map" which can be found via clicking into this link. If you enter a location (perhaps using your post code) in the section provided in the top left hand corner, you will find the area which interests you. On the Interactive Map you will need to use a set of double clicks to then home-in more closely to your area of interest. It may take trail and error to find exactly what you are after. But it is really worth the effort.

Many people will be surprised by what they find. For instance, Dronfield where I live is seen by many as being a middle class commuter town, yet it is pocked marked with former shallow mine workings which if disturbed could lead to major problems of subsidence. A matter the town has not been free from in the past. Yet its period when coal mining occurred goes well back into history and was often via rather primitive forms of coal extraction, occurring at rather shallow levels. Characteristics which could prove dangerous given modern underground fracking activities.

Once you have found the location which interests you on the Coal Authority Map, then use the index in the top right hand corner to explore the areas make up.

In the map which appears above I show areas such as Dronfield, Unstone and the very northern section of Chesterfield. Then on my map near the right hand side (about a third of the way down) appears Marsh Lane (although it is not easy to find), which is close to where INEOS are seeking their initial right to engage in a vertical underground excavation. In fact, the field they wish to start from appears on my map just below the south of Marsh Lane on the right hand side as you eye moves south towards West Handley. It is exactly where two red crosses appear showing two old mine entries. This danger spot is exactly where INEOS wishes to start its underground operations. See here in the red box provided by INEOS itself -


The masses of red crosses found on Coal Authority maps (such as my top map) are former mine entrances, whilst the brown crosses show mine exits. There are more red crosses than brown ones because old pits often also used their single entrance for exit purposes.

When you examine the Coal Authorities Interactive Map use their index in the top right hand corner.  If you click onto the section "Mine Entry" you will find your own equivalents to the ones on my opening map. On the Interactive Map you can even click onto red crosses and this will give you some information about these mines past workings, sometimes giving you the depth of the workings , which may be very shallow.  Yet shallow mines may well be the most problematic, for the workings they reveal are often just a short distance beneath a house, garden, pavement, road, work place, school, shop or other social provision. Those whose properties are effected are likely to find them falling in value and difficult to insure against subsidence.

The masses of entries and exits shown on the map above are contained in an area with a width of just five miles. Yet the Coal Authority admits that it is unlikely to have discovered everything yet. For instance, some former mine shafts in my area were only discovered following the construction of a modern by-pass which is shown in green on the left hand side of the above map

To find the equivalent of the black crossed areas which I show, then hit the section in the Coal Authority index marked "Development High Risk Area" - and note the fracking warning this term entails. The more you enlarge the scale of the map, the more such details it will reveal. For instance, the two red crosses where I indicated that INEOS wish to operate from near Marsh Lane can then actually be seen to be placed on top of two small black crosses as shown on my second map. Unfortunately, in its submission to the Derbyshire County Council the Coal Authority itself did not appreciated or even discuss this point.

INEOS themselves admit that when it moves to horizontal fracking techniques its activities can fan out for around a mile and a quarter. Yet in the USA (where INEOS admit they will need to hire fracking experts) the firm Haliburton have engaged in underground operations for some three and a half miles.

The scale of the dangers of fracking operations over wide sections of Derbyshire is also illustrated in the Coal Authority Map showing the full areas of Development Risk via this link. To find similar problems in other areas  link here.

P.S. At a crude estimate by looking at a larger version of my above map it contains at least 840 mine entrances and exits.

Added 23.10 hours on 5 December. This is the size I was looking for - hat tip to Darren Grayson via "Eckington Against Fracking"

Whoops it has now disappeared