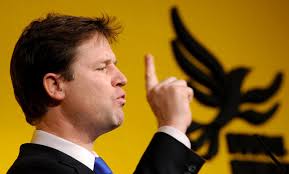 At the next General Election, Nick Clegg wants us to vote for a further coalition government. He does not seem to know that whilst we might get a coalition government by accident, this can't be achieved openly. This is because there are unlikely to be any Coalition candidates.

Just what mechanism does he wish us to follow to achieve his end?  Do we vote Liberal to show our support for his case?  Yet if he thinks we should do that, are we not then in danger of electing what he says he does not want?  For we could then get a majority Government - a majority Liberal Government.

To get us to vote for a hung parliament, he can't even ask us all to vote just as we did in 2010. For numbers of voters have died or moved overseas since then, whilst many others have been newly enfranchised.

He says he wants to get rid of the two-party system. But if we agree with him sufficiently and, therefore, flock to vote Liberal we could get a one-party Liberal set-up and not his desired Coalition.

The only way to provide a reasonable chance of having continuing coalition governments is to encourage the development of a multi-party system; so that no-one will ever know what form of coalition is ever likely to emerge.  It will all depend upon deals between the elected parties.

Given the electoral logic of our first-past-the-post electoral system, a two-party system is always on the cards. Whether he likes it or not, the role of the Liberals is to seek to become a part of the very two-party system which Clegg decries.

We could, of course, get a coalition government after the next election which excluded the Liberals. It could be either a Lab-Con coalition, or one involving third parties other than the Liberals. Then even without an outright winner, there is still the possibility of a minority government.
Posted by Harry Barnes at 10:52 PM No comments: