12 August - 50th Anniversary of the formal opening of the Dronfield Contact Club on its current site. 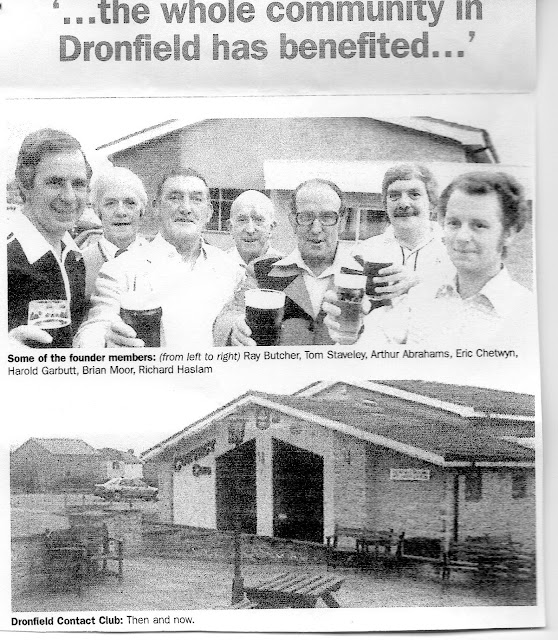 Posted by Harry Barnes at 10:29 AM No comments:

My Submission To Derbyshire County Council On Fracking

(a) Under “Petroleum Exploration Development Licences”, Ineos Upstream Ltd have the right to seek to apply for a series of similar applications to the above across wide areas of Derbyshire. The examination by the County Council of this initial application is ,therefore, of great significance as it could set a pattern for future applications, including conclusions that might come to be drawn upon later. So the closest possible form of scrutiny needs to be applied to this initial planning application. This would be assisted by a full site visit by those County Councillors who serve on your Planning Committee. It would be especially helpful to include the local Eckington County Councillor in both the preparations for such an inspection and in the site visit itself, to draw from local knowledge. Further relevant information could come from experts outside of the County Council, including relevant academics (e.g. at Sheffield University such as Dr Domenico Bau) and officials and representatives from both North East Derbyshire District Council and the Eckington Parish Council. The local MP has also taken a clear interest in this application.

(b) The closest examination will, of course, need to be applied to the very site which Ineos is seeking to use for its operations. A start can be made by examining the site via the Coal Authorities Interactive Map and making full use of its “Planning Themes” as shown in the top right corner of their map. The Coal Authority have, however, pointed out to me that the matters on their interactive map only refer to their current knowledge and more problematic information could come to be unearthed at any time in the future - see http://mapapps2.bgs.ac.uk/coalauthority/home.html

A further source of relevant and valuable Coal Authority information for our area can also be found here -
https://www.gov.uk/government/publications/coalfield-plans-derbyshire-county-coucil-area In fact INEOS have drawn from this source in producing a map relating to their proposed Bramleymoor Lane development in their submission to you. Their proposed site is in a red box which they have added to the Coal Authority Map. This map is shown later. It shows that there are two old mine entries (or exits) in the field where they wish to engage in drilling. It is possible that other such entries and exits exist in that field, but have not yet been discovered. How safe will deep excavation and the construction of a substantial rig be in such circumstances ?

It should also be noticed that the black shaded areas and the black round circles on the Coal Authority's maps reveal a wide range of other “High Risk Development Areas” (including many old entrances) in the vicinity of the site. These include a nearby housing estate at Marsh Lane. Clearly, your Council should err on the side of being cautious rather than being sorry.

(c) It should also be taken into account that the North East Derbyshire District Council (on three occasions) rejected applications for the use of the Bramleymoor Lane site as land for the operation of a car boot sale. On their 6 March 2009 response see application number 09/00038/FL. You can pursue this matter with the District Council. One of their concerns was the problem about likely heavy traffic in a rural area, this is related to my next point.

(d) The amount, size, nature and regularity of heavy traffic proposed by Ineos into and out of the Bramleymoor Lane site is extremely worrying. The proposed extensive use of the already busy narrow traffic routes of Dyche Lane and Eckington Lane is a matter of serious concern, especially given materials being driven to the site and then taken away – especially by major HGVs . This matter should be given the considerable attention , especially during the site visit which I propose in (a) above.
(e) Ineos seek to give the impression that the work they are seeking to undertake will occur in a rather isolated rural area. But this is not the case. In the close proximity to the proposed site, there is the community of Marsh Lane – and a school. This is a village of almost 1,000 people many of whom live on a housing estate in close proximity to the proposed site – starting out only some 330 yards away according to the map from Ineos which appears on your own page 40 of their submission here - http://www.ineos.com/globalassets/ineos-group/businesses/ineos-shale/our-operations/bramleymoor-lane/pedl-doc/pedl-300-1-doc-7-environmental-report.pdf This results in problems of noise, pollutants and nearby heavy traffic for long periods over several years. There will also be unsightly, round the clock intrusion of a rig operating over much of this time, which will often provide serious light pollution - including throughout the night. The rig from proposals submitted by Ineos could stand at 86% the height of the dominant Crooked Spire at Chesterfield. It is not something which can be hidden from view from such a short distance.

THIS IS THE MAP REFERRED TO IN (b) ABOVE

(f) Under the planning procedures which are in place, the current application for an exploratory well are dealt with theoretically as if they were entirely separate from a later application for the hydraulic fracking of shale gas. Yet everyone knows that this is not the case. Ineos would not be seeking the authority to operate an exploratory well near Marsh Lane unless it had very strong reasons to believe that this will lead on to evidence which would enable them to make an application in the future for hydraulic fracking operations, either from the same area or nearby.

The dangers of hydraulic fracking in the vicinity in the future are massive. The main sources for the extraction of shale gas will be former areas where coal extractions have taken place or coal seams remain. In the immediate Eckington, Marsh Lane and Coal Aston areas, these are mainly beneath built upon urban areas and not mainly in the green belt.

The Coal Authority sources which I refer to in point (b) above reveal that surrounding built up areas near the proposed site are pock marked with former mine entry points. Such areas are likely to be the leading sources for access to shale gas. On page 6 of the INEOS publication entitled "INEOS : the energy behind UK manufacturing" it claims that its horizontal fracking activities can run up to 2,000 metres (which is around a mile and a quarter). From the proposed site this would reach Eckington, Apperknowle, West Handley and Middle Handley. Then there is also a possibility that horizontal underground fracking could reach much further than INEOS indicate. A firm called Halliburton in the USA having engaged in such operations for three and a half miles. See -
http://www.halliburton.com/public/news/pubsdata/press_release/2016/halliburton-teams-up-to-complete-longest-lateral-well-in-us.html

It needs to be appreciated that the Coal Authority have been obliged to conduct treatment works in the area for mine stabilisation purposes. There was a case at the back of a property on Eckington Road itself in July 2011. See their contract reference CA18/2295.

Local people are naturally concerned about the impact which moves to fracking in their vicinity would have on (a) the safety of their property, (b) its commercial value and (c) the costs and availability of appropriate house insurance.

There is a rich literature on relevant past coal mining operations in Derbyshire, especially the 993 page “The Derbyshire Miners” by J.E. Williams (George Allen and Unwin,1962) which can fruitfully be consulted so that fracking dangers are not missed. Also see http://www.oldminer.co.uk/

(g) There is a further source which may be as significant as that provided by the Coal Authority. It is the British Geological Survey. The British Geological Survey (BGS) runs this web-site - http://www.bgs.ac.uk/
I have been able to establish a much better relationship with the Coal Authority than with this body. But hopefully you are in receipt of other relevant submissions about their work in your area. You can also turn to them yourselves on the following matters.

The Marsh Lane area (and much of Derbyshire) sits on an active geological fault line running from south Humberside to the Cannock area of the West Midlands. There was an earthquake centred on Market Raisen on 27 February 2008, which had a wide ranging damaging impact in Derbyshire. The following survey shows that 7,872 reports of damage were received from Telegraph readers as a consequence. However, many people were unaware that the survey was even taking place. 150 reports were received from Derby, 83 from Chesterfield and 303 from nearby Sheffield. Several other areas in Derbyshire are also listed, including four from Dronfield where I live. I know of others locally which were not recorded. See - http://www.telegraph.co.uk/news/uknews/1580010/UK-earthquake-town-by-town-statistics.html

The question arises as to how far underground excavation leading to eventual underground fracking will replicate such problems given the nature of local geological fault lines. Earth tremors having halted drilling near Blackpool in the past.

(h) Other safety related concerns include – (i) Groundwater quality – contamination via the use of chemicals and the mobilisation of naturally occurring radioactive materials, (ii) waste from the contamination of drilling and fracturing activities; such as drill cuttings, waste drilling mud from the use of oil and water, (iii) loss of local habitats through noise and vibration, air and water, as well as the truck movements mentioned earlier, (iv) possible methane and nitrogen oxides released into the atmosphere during the recovery of shale gas itself and (v) the impact on the supply of water on local supplies if catchments are over-abstracted.

(i) Vertical drilling is also an unproven technology which could involve or disturb naturally occurring gas deposits including benzene which is cancer causing when drilling fluids are used. The operator Ineos are in an impossible position to tackle these and other potential problems having no experience of operating an onshore drilling site. See - https://www.gov.uk/government/publications/shale-gas-extraction-review-of-the-potential-public-health-impacts-of-exposures-to-chemical-and-radioactive-pollutants

Posted by Harry Barnes at 9:51 AM No comments: