How a Back-Bench MP can make use of Early Day Motions.


Me as an MP in the Commons

There is a parliamentary avenue open to Members of Parliament known as Early Day Motions (EDMs) which are normally only made use of by back-bench MPs. They are for seeking a parliamentary debate upon a proposal at an early date. Yet although very few of these proposals are then ever scheduled for a parliamentary debate, they can still be used by MPs for a number of helpful purposes.
An MP (along with those they have initially arranged to support their proposal) can see which other MPs add their signatures in support of their measure. There can be strength in numbers. If a measure gains support from MPs from differing political parties, this can be particularly helpful in seeking parliamentary avenues for the pursuit of a proposal.
A proposal can also gain support from outside of the Commons from local, regional or national avenues. This can add to the campaigning for a measure.
Click here for a parliamentary explanation on what EDMs are about.
The MPs behind an EDM can also use it as the start of a parliamentary campaign of their own. These include (a) putting down an appropriate amendment to a passing piece of legislation and (b) seeking a Ten Minute Rule Bill on the matter, which if carried can open up a legislative avenue for the measure.  Then short of legislative avenues the issue can be raised in the Commons by (c) seeking an Adjournment Debate at the close of a parliamentary day, (d) obtaining a debate in Westminster Hall, (e) referring to the EDM during appropriate parliamentary question times - including the weekly opportunity at Business Questions with the Leader of the House where what you wish to see as coming business can be raised.
When I first became an MP in 1987 the Commons programme started with the Queen's Speech on 25 June. I had then to put my name in five times to the Speaker before I was called to make my maiden speech on 13 July. So I had in the meantime only limited avenues open to me, such as writing letters to Conservative Government Ministers on matters such as dealing with their need for help over the consequences of an Underground Fire at Callywhite Lane in Dronfield.
On the 6th July I, therefore, submitted my first EDM which gained the support of 46 fellow MPs mainly from South Yorkshire and the North Midlands and was entitled "Underground Fire in Derbyshire". It said "That this House calls on the Secretary of State for the Environment  to take immediate arrangements to meet a deputation from the firms, councils and trade unions directly effected by the underground fire burning on Callywhite Lane Industrial Estate in Dronfield, Derbyshire to discuss ways and means by which his Department will assist in overcoming this emergency, and to report to this House on the outcome of these discussions."
Whilst the EDM needed my back-up via other avenues, the meeting I proposed eventually took place. Without achieving everything we were looking for it opened up some avenues of Government assistance. The parliamentary pressures I added to the EDM included an Adjournment Debate on the topic and a 10 Minute "Underground Fires Bill" which was started in the Commons and then published, but whose further progress was then blocked by the Government.
Unfortuneately, I hold no full record of all the EDMs I submitted or supported in my first two years in parliament. But details of those EDMs I submitted and supported in my next 16 years can be found by clicking here.   It shows that over that time I proposed 503 EDMs of my own and supported 12,010 submitted by fellow MPs.
The seat I represented in parliament was North East Derbyshire. It now has a Conservative MP called Lee Rowley who has represented us for 3 years. In that time he has not submitted a single  EDM of his own. Then in total he has only ever signed a single EDM submitted by another MP. This is an extreme pro-Brexit proposal (click here) submitted by a Tory MP Bill Cash whom I opposed year in and year out when I was an MP.
At one time Cash chaired the European Union Select Committee which I served upon. He was my least favourite Tory MP and that is saying something.
Why except during a divide in the Parliamentary Conservative Party over Brexit has Lee Rowley not ever made use of the EDM proceedure ? For whilst it is not the most telling of parliamentary avenues on its own, it is very easy for MPs to pursue. When they turn up in a morning they can collect the day's Parliamentary documents. They can easily then look at any new EDMs which are included. Signing those they agree with. Then writing any amendments they would like and drafting any new EDM they wish. Then they merely need to pop down a corridor to hand material into the Speakers Office for future publications. All an MP needs are ideas, concerns and principles. We then know much more about them - where we agree and disagree.

Lee Rowley MP in the Commons
Posted by Harry Barnes at 2:57 PM No comments:

75 Years Ago Today - My Introduction to Party Politics 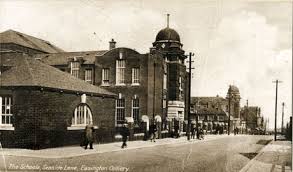 The area from which I first saw Shinwell's election poster in 1945. The posters I refer to were, however, then behind the photographer's position.

After the end of the war against Germany, Parliament was dissolved on 15th June 1945 in preparation for the 1945 General Election which took place on 5th July. The count and the declaration of the result did not, however, occur until 26th July as the armed forces vote had to be collected in and distributed to their appropriate constituencies. At the time we were still at war with Japan.
On what I judge to be Monday 18th June of that year (exactly 75 years ago today) I gained my first understanding that something rather special was taking place. For as an 8 year old leaving for home from my Junior School, I ran up a side street when I suddenly stopped on seeing a poster stuck on a wooden lamp post ahead of me on the other side of Easington's main road called Seaside Lane. It was unusual to see posters in those days apart from those outside the local cinemas.
The poster which gained my attention said "Vote for Shinwell" who was the local Labour parliamentary candidate. It was printed in green, which were Labours colours at that time in the North East. As I next walked home along Seaside Lane most of the lamposts had the same poster stuck on them. Then there was a single larger poster on a board attached to railings. It did not merely say "Vote for Shinwell" but it warned us of the dangers of Winston Churchill, Brenden Bracken (the First Lord of the Admiralty) and other Tories being returned to office.
I had come across something that was unthinkable and exciting. Our war-time hero who had seemingly led us to Victory in Europe and a wonderful street party to celebrate the achievement, was now under attack.
More drama followed. Shinwell's election address was delivered - again when I was then at school. When I got home every house on our Council Estate seemed to have a copy placed in its front window. Including our house and where my Grandmother and Uncle Bill lived four doors away.
It was time for me to start reading our Daily Herald and Reynolds News to see what was going on. Then on a radio political broadcast Churchill claimed that our mild Labour Leader Clem Attlee would preside over a new form of Gestapo. I was offended, Churchill seemed to be saying that places such as Easington were full of Nazis; rather than pigeon fanciers, methodists and fathers in flat caps making their way to Workingmens ' Clubs. Did he not know that Dennis Donnini whose father ran the ice-cream shop on Seaside Lane had just been given a posthumous Victoria Cross ?
In the General Election, Shinwell obtained a massive 32,257 majority and everyone I came across seemed to be Labour. So was I. Initially it was mainly tribal loyalty.  But this came to be deepened by some of the initial achievements of the 1945 Labour Government, then by developing socialist concerns about the needs to transcend Gaitskellism.
But the siting of that 1945 poster was the start of my commitment to socialism.

The above is an adjusted version of the start of an article I wrote for the Journal of the North East Labour History Society in its Volume 48 2017. I have, however, corrected what I then said about Churchill claiming that Labour would have Gestapo-type tendancies. He made the claim in a radio and not a cinema presentation.
Posted by Harry Barnes at 4:47 PM No comments: