Who Should Have The Vote?

What should be the principle on which we decide who should have the vote?

To me enfranchisement rights should go to anyone who is directly effected by the decisions of those who determine laws, regulations, taxation and other public measures which impinge upon their lives.  The only justification I can see for restricting voting rights would be on the grounds of a person's incapacity to exercise such rights. This limiting factor should, however, err on the side of caution - excluding from enfranchisement only those, say, under 16 years of age* and those with such a serious mental impairment that it makes them incapable of exercising voting rights.

That would mean that anyone who is settled in the territory concerned would have the vote. Yet we currently exclude people from voting who have settled here from overseas and are citizens of countries other than Ireland and Commonwealth nations. We also exclude many who are imprisoned. Yet they are clearly subject to the laws of the land.

The only problem to resolve under the principle I propound, is what should happen to British citizens who are settled overseas? It seems to me that it is only if they are significantly effected by the general principle I am using, that they should qualify here. It is the only area which calls for any serious judgement to be made. Otherwise the principle I am using is straightforward.

Are any of our politicians arguing the above case? If not, that is seriously disturbing. It indicates a flaw in their commitment to democracy. As is the fact that even under our current inadequate enfranchisement provisions, millions of those entitled to vote are not registered.

* = we need to recognise that the qualifying age for voting is arbitrary; but any selective method of determining when a young person should be allowed to vote would have serious dangers attached to it - which could lead to pressures to limit adult enfranchisement.
Posted by Harry Barnes at 10:01 AM 2 comments:

Dugsie : That Is A New One On Me 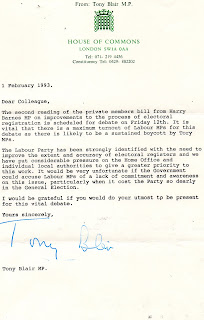 Posted by Harry Barnes at 7:59 PM No comments:

What Progress Is Ed Making?

May Day In Iraq 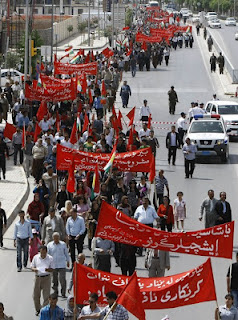 Hat Tip : Musings On Iraq
Posted by Harry Barnes at 4:12 PM No comments: