Alice : Who Art Thou? 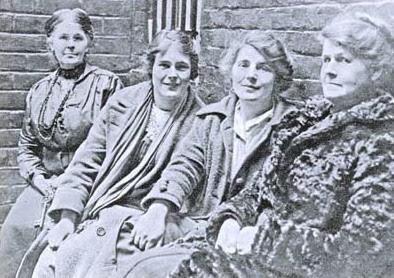 Alice Ann Wheeldon (1866 – 1919) was a member of the Independent Labour Party, a  pacifist and a campaigner against our involvement in the First World War. She was arrested in 1917 along with her family and imprisoned. Evidence given in the case against them was fabricated by a government which was eager to disgrace the antiwar movement. She was falsely convicted of conspiring to kill the Prime Minister, Lloyd George.  See here for more details.

Posted by Harry Barnes at 9:47 AM No comments:

If you can't beat them, join them. What will the baby's name be? Have a bet on "Harold".

As everyone knows, a King Harold ruled and was killed with an arrow in his eye by the forces of William the Conqueror in 1066.  But he is a huge figure in our history. He was King Harold II. There having been an earlier King Harold from 1035-40.

In 2066, the new baby will reach 53 years of age. His father, Prince William will make 84 that year. Unless the likely coming reign of King Charles III, leads to the end of the monarchy; then William V is likely to hold the crown in 2066 - as nowadays wealthy and privileged people can be kept alive well into their old age.

William can then resign in favour of his son in 2066, bringing the crown to Harold III exactly 1,000 years after it was held by the really famous King Harold.

Besides my proper name is also Harold and the new baby was born on my 77th birthday. When that is discovered the media can really start giving the chap some coverage in deepth.

Update : He has been called George. The Royal Family obviously have no sense of history. Good job that I never got round to putting a bet on.
Posted by Harry Barnes at 8:27 PM No comments:

Over 50 Sources For Socialists

They can be found here.
Posted by Harry Barnes at 10:32 PM No comments:

Should Democratic Socialists Seek To Engage With "One Nation Labour"?

The above question is currently being debated on the Web-Site run by Independent Labour Publications (ILP).

To follow and join in the debate, you can use this link.

That takes you to an article which I have contributed. But at the close of my contribution, you will also find a series of key links to items by others who generally take differing lines to myself.

We can only advance our own understandings by entering into genuine debates with others.  As the Labour Party is seeking to move its ground from New Labour to One Nation Labour, how should democratic socialists respond? With enthusiasm, opposition or in our own third way?
Posted by Harry Barnes at 12:56 PM No comments: