MPs Making Their Minds Up On Brexit. 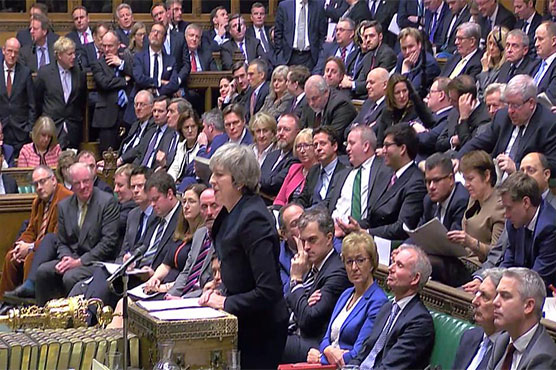 MPs are split into a number of difficult-to-reconcile camps over Brexit. Then whatever line the Government now tries to take in any further negotiations with the EU, it faces intransigence. For the EU does not wish to make any further concessions which could lead to other member States looking for such favourable withdrawal arrangements.

The current divisions in the Commons cover - (1) Although they were  in a minority on Tuesday; those who accept the deal which the Government has struck. (2) Those who would have accepted the deal if it had not included the backstop arrangement. (3) Those who want a complete break with the EU. (4) Those who wish to retain close links via a Customs Union. (5) Those who wish to obtain a Norwegian type arrangement, which is seen by some as being virtual membership of the EU but without any of the rights of membership. (6) Those who call for a further referendum on the issue - often in the hope that the electorate will now have changed its mind. (7) There might be other "remainers" who feel that if the Commons can't make its mind up, this will lead to a situation which stops us from leaving - or that it may aid other objectives they have in mind, such as moves towards Scottish Independence. (8) Then there are those who are seeking a General Election seemingly on the Brexit issue, but also with many other (not unimportant) issues in mind.

Given the numbers of MPs within each of these categories, how on earth can a parliamentary compromise ever be reached ? Well desperate times call for desperate measures.

What about parliament providing for a ballot (with ballot papers) for its MPs where the above types of options (neutrally worded) are voted upon via the device of the single transferable vote. With valid votes needing to cover all the above type of items by being numbered, say, 1 to 8. Unless the transferable vote finally led to a tie (say 318 each) then the MPs will have made a decision. Otherwise between the last two, the Speaker could pick the winner out of the hat.

If this all sounds to be daft, it at least reaches a position for the Government to pursue. Unlike the current situation it gives a form of clarity.


Recorded unemployment is still above twice the percentage that it was in the post-war period up to the early 1970s. Then many jobs are not permanent or paid as well as they were when we had major coal, steel and cotton industries. Trade Union membership has fallen considerably so workers interests are not pursued as well as they were, Many jobs are impermanent, on zero hours and (despite minimum wage legislation) very poorly paid. There are many communities which have been destroyed by such developments. Labour needs to pursue such people's interests and transform their communities away from being areas of serious social depression. In terms of party political advantage it would also help us to maintain a solid base. Such people overwhelmingly voted to leave the EU, we should not seek to alienate them on this, whilst pursuing a Brexit deal that will not further harm them. To pursue the well-being of deprived working class people would also improve effective economic demand and stimulate economic growth.

And Again 19 January : John Major is arguing a similar line to my initial comment. It is either a matter of "great minds think alike" or "fools seldom differ" - although we have had many past disagreements. See here.

Added 29 March : Today saw Teresa May's third defeat over her exit proposals from the EU, by 344 votes to 286. 34 Conservative MPs voted in opposition to their party whip. Whilst 5 Labour MPs did the same from their position. If those MPs had all followed the line of their front benches, then the vote would have tied at 315 each side. Attention would then have been directed at the 16 or so MPs who abstained. Which of these had a pairing arrangement with their opponents ? Which were deliberate absentions ? And were any just absent without leave ?  I am not aware of anyone voting in both lobbies to show they were making a positive abstention.

Posted by Harry Barnes at 5:09 PM No comments:

The Coal Authority at Mansfield

A valuable update on the Coal Authority's discoveries about former mining operations appears in their recent 32 page publication which is a Modern Law Supplement entitled "Meet The Experts". Click here for its electronic version.

Although it is not mentioned as such by the Coal Authority, it contains information with wide implications for the dangers of fracking in such areas - which includes my local North East Derbyshire.

Amongst the information it supplies is (1) that nationwide it deals with 1,200 incidents and subsidence claims per year, (2) it is currently managing £4 million worth of liability on behalf of the Government, (3) it treats over 120 billion litres of water every year, (4) recently it dealt with a subsidence project where thirty houses had to be demolished, (5) it inspects 10,000 mine entries annually, (6) it has information on 173,000 mine entries, (7) 57,000 such mine entries are situated in urban areas, (8) 130,000 properties lie within only 20 metres of at least one mine entry, (9) most conurbations in Britain (outside London) are sat on coalfields - which is no less than 25% of all properties, (10) it manages a compensation scheme under the Coal Mining Subsidence Act and (11) land effected by coal mining can be restricted in its use, mainly for purposes of public protection - a point it needs to be pushing in relation to the dangers of fracking.

Via a Chart it also shows that (a) 11% of the total UK is situated on coalfields, (b) 600 surface hazards are reported each year, (c) 27% of coalfields are in risk of groundwater flooding, (d) 15% of the coalfield is effected by Radon and (e) 1 in 4 of all properties lie in British Coalfields areas.

Page 13 provides a map showing such Coalfield Areas in Britain. These can be studied more deeply here via using the Coal Authority's Interactive Map (click here).

We could do with knowing how far these Coalfield Areas co-inside with the territory issued to INEOS and others under the Government's Inland Petroleum Exploration and Development Licences (PEDLs) as shown here.

Posted by Harry Barnes at 12:47 PM No comments:


The following item appears in the current edition of "Private Eye" which covers the period from 22 December 2018 to 10 January 2019.

Anyone wishing to add points to the following item should do so quickly in order to seek to catch the next edition. The Private Eye e-mail editorial address being strobes@private-eye.co.uk and their postal address is Private Eye, 6 Carlisle Street, London W1D 3BN.

Posted by Harry Barnes at 8:41 PM No comments: