Fracking : We Can Still Press The Derbyshire County Council

Although INEOS have appealed over the head of the Derbyshire County Council to the Government in an attempt to gain permission to undertake vertical underground operations in a field next to Bramleymoor Lane near Marsh Lane in North East Derbyshire, the matter is still also in front of the County Council. As is shown here, the County Council have given us until 7th December to challenge what turns out to be a set of six fresh documents which INEOS recently placed before them.

(1) Here is the first of these documents which was submitted on 15 August. It covers Ecology, Archaeology, Landscape and on a brief effort to dismiss the NE Derbyshire District Council's submission.

(3) Here is the third document submitted on 15 September covering a wide range of items including Noise, Metrological conditions and Topography.

(4) Here is the fourth document also submitted on 15 September covering INEOS's responses to the Campaign to Protect Rural England, Friends of the Earth, Lee Rowley and Eckington Against Fracking -  in opposing a section of Lee Rowley's position they claim that considerations of the "cumulative impact" of further fracking in the area is not a matter they are legally required to cover.

(5) Here is the fifth document submitted on 2 October covering planning for the Core Well.

60 Years Hard Labour : Easington and Beyond 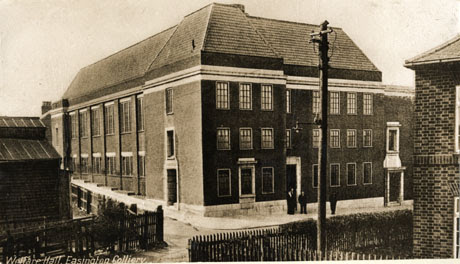 
60 years ago today (at the age of 21) I attended my first Labour Party event. It was a meeting of the Easington Divisional Labour Party in County Durham and was held at the Workmens' Club Hall at Blackhall Colliery. It was well attended, for I am aware that a later annual meeting I went to had 76 delegates present.

I had applied to join my local Labour Party as a means of entering an essay competition on nationalisation which was being run and paid for by the local Labour MP, Manny Shinwell. I don't know how many people entered this contest, but my essay was numbered 16.

I was given the second prize of £3 (which is considerably more at today's prices) and went to the meeting at Blackhall for Shinwell to present me with my winnings. The first prize went to John Alderson who was an English Teacher at Shotton Colliery Secondary Modern School. Ann, the girl I was later to meet and marry was one of his students around that time, being seven years younger than myself. Within the following two years an active local Fabian Society was established at nearbye Peterlee, with John as Chair and myself as Secretary.

The first Labour Party Branch meeting which I attended was held the following month at Easington Colliery where I lived (the above photo shows the venue). At the following year's Annual Meeting a few months later I became their Branch Secretary, acting as a sub-agent for Manny Shinwell at the 1959 General Election. Shortly before then I was also runner-up for the position of Constituency Party Secretary, when the former long serving Secretary stood down and five of us sort his post.

But my initial burst of Labour Party activity came to a halt after almost three years, when I went to study Politics and Economics full-time at Ruskin College in Oxford from October 1960.  Because of the clash of dates, I even pulled out of being my constituency's delegate to the 1960 Labour Party Conference - missing Gaitskell's famous "fight, fight, fight and fight again" speech. Yet it was a resolution adopting a "ban the bomb" position (in opposition to Gaitskell's stance) which I had drafted which had become our Constituency Party's policy.

Whilst attending Ruskin College for two years and then during the first year of my subsequent studies at Hull University, I still retained my Easington Colliery Labour Party membership. But when Ann and I married in 1963 and we moved to Hull, I stopped being a card holder for the following five years. I was now studying politics and philosophy at University, whilst keeping links with the Labour Movement by attending Tribune and similar meetings.

My lapse of Labour Party membership was due to the fact that Ann and I were moving around via Hull, Worksop and Sheffield until we finally settled in Dronfield in Derbyshire; where I have now been an active member of the Labour Party for the past 48 years. This has included a spell as the local Labour MP for 18 years. At the moment as an octogenarian I hold the positions of Political Education Officer (for our activities, click here ), delegate to the Constituency Labour Party and member of its Executive Committee. But at my age and hobbling with a stick I tend to let my fingers do my walking - a bit like writing that essay for Shinwell's competition.