UK Polling Report, under the heading "WOULD YOU VOTE FOR AN ATHEIST" concludes -

"In the US survey, the most electoral objectionable group was atheists, with 53% of Americans saying they would not vote for an otherwise well-qualified Presidential candidate who was an atheist. One would expect that figure to be much lower in the UK, but actually it is still surprisingly high at 20%. One might not have guessed it, but not believing in God would appear to be almost as much of an electoral handicap for a potential leader in the UK as being Muslim or gay."

I appreciate that becoming President or Prime Minster is somewhat different from being a back-bench MP. But I was an MP for 18 years and an atheist. No constituent ever asked me what my religion was. I went to Civic Services and Church/Chapel Funerals as part of what I saw as being my civic (or personal) duty. On the other hand I attended meetings of the Humanist Society in Parliament. I neither hid nor pushed my atheism. I was fully involved in the politics of Northern Ireland, but no-one even raised religion with me - not even to ask if I was a Catholic Atheist or a Protestant Atheist. Politicians (and others) who beat the religious or anti-religious drum worry me. It is, for instance, possible to oppose faith schools without being anti-religious. Politicians should neither do God nor Anti-God. There are plenty of other things to get on with. 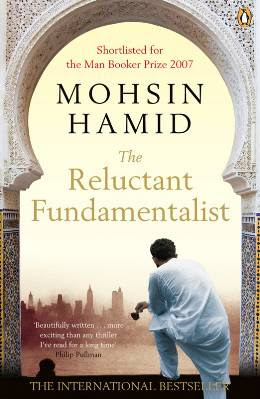 I am reluctant to review Mohsin Hamid's book "The Reluctant Fundamentalist". It is a short novel of under 45,000 words which many will devour at a single sitting. I wish to encourage others to read it, but it would be inappropriate for me to undermine that experience by analysing and therebye describing in detail what it is about or how the subject matter is handled. Yet it would be great to discuss this work with others who had already read it.

In my review of "The Islamist" by Ed Husain, I argued that people like myself who had been brought up to discuss ideas within the Western Political Tradition now needed quickly to get up to speed on a whole range of ideas and understandings within Islam. Mohsin Hamid shows what can happen to an intelligent and able young man with an Islamic background when he comes to absorb both the attractions and complexities of life in the West. It seems to me to provide understandings which help to put some of the tomes I have recently been studying into a clearer perspective.

If I encourage anyone to take up this book and they then come to judge that I have exaggerated my case, then at least I will feel justified in persuading them to have turned to what is by any standards a good read.
Posted by Harry Barnes at 8:35 PM 4 comments:

Is It Time For A Negative Interest Rate?

FACE TO FACE WITH A NEGATIVE INTEREST RATE.

In 1960 I was 24 and a fairly new full-time student at Ruskin College when I was set an essay by my economic theory tutor on the likely impact of a negative interest rate. Unfortunately I could find no reference to anything called a "negative interest rate" in the reading list which he had supplied, nor could any of my fellow novice students enlighten me on the meaning of the term.

So when it came to the tutorial, I read out what I had thought through for myself. My tutor kept correcting me until it dawned on him that I had persistently got hold of the wrong end of the stick. He then heard me out in silence.

I had ignored the notion that changes can occur in the value of money due to inflation or deflation. Instead I dreamt up a situation in which real values were static, but any savings which people deposited would receive a cut when retrieved. Save, say £100 and get £95 in return.

Even such an odd theory gives some limited scope for intellectual gymnastics and my tutors end-of-term comments obviously looked back on this incident. He reported that I "showed a distinct ability to think for myself, but at a superficial level" ! It is a position which is, no doubt, reflected regularly in this blog.

A POSITIVE RETURN TO A NEGATIVE INTEREST RATE.

Ken Livingstone is amongst those calling for a further cut in interest rates to boost investment. In real terms this would produce a negative interest rate for savers.

The case for doing this is made in today's Morning Star by Jerry Jones. He states that the government should "drastically reduce interest rates to around 2% and bring in regulations last seen in the 1950s and 1960s to ensure that the banks pass on the lower rate.....(to) ease the situation of those heavily in debt and (so) people would have more to spend. This would increase overall economic demand. These measures would make it cheaper for individuals and businesses to take on loans, which would help to boost economic demand, investment and employment. Fewer people would be in danger of losing their homes through getting in arrears.....(the) downside of slashing interest rates whilst inflation stands over 5% is that interest rates would be negative in real terms (my emphasis HB) so savers would lose out.However, cuts would act as an incentive to invest and spend, which would help to stimulate the economy".

Given that I first stumbled into negative interest rates 48 years ago, I will add two extra factors to Jerry Jone's powerful analysis.

First, savings are also used for investment purposes when banks and other financial institutions are obliged to act sensibly. Money withheld from savings needs to be invested or spent to create growth. However, money kept in purses and wallets does less than money properly saved.

Secondly, if the Government are to adjust interest rates in order to influence economic activity then (although they hold reserve powers), they need to reclaim the power to do this from the Bank of England. Those of us who came to learn about negative interest rates the hard way, knew that Gordon Brown made a great blunder in his first act as Chancellor of the Exchequer when he tied his hands behind his back.
Posted by Harry Barnes at 6:45 PM 3 comments:

I fulfilled my commitment (made in the thread below this one) by keeping away from blogging for 24 days.

In any case, little happened in my absence apart from (1) the collapse of capitalism, (2) Gordon Brown's moving from zero to hero, (3) Barack Obama surging ahead in the race for the White House and (4) Sheffield FC winning two FA Cup Qualifying Games. Rather more important was my wife's birthday.

Over the time of my absence, I undertook a detailed study of the 121 Reports I had issued to the General Commmittee of the North East Derbyshire Labour Party in my 18 years as their MP - along with associated Hansard extracts and newspaper cuttings.

I made a lengthy analysis of all this stuff.

But I pushed it all to one side for the meeting I addressed in Dronfield yesterday evening which was entitled "That Was Parliament That Was". Instead I concentrated on the politicians' peccadilloes which I had observed during my 18 years in the Palace of Varieties.

The turgid stuff is intended for a book I am writing. On the other hand, if I am looking for a commercial success then perhaps I should stick with the peccadilloes.
Posted by Harry Barnes at 6:05 PM 7 comments: