Precedent plays a big role in parliamentary procedures. There was a tradition of Prime Ministers making use of Royal Prerogative powers to lead us into military conflicts, without the prior consent of parliament being required. This is the way that Tony Blair intended to act over the invasion of Iraq, until a campaign led by Graham Allen the MP for Nottingham North helped to change his mind. What happened is explained below in Graham's own words, as they appeared in Hansard. What he did meant that prior to the invasion of Iraq, Blair was pushed into seeking the support of the Commons for his intended actions. Which at least gave the opportunity for large numbers of Labour MPs to oppose the move, even though we failed to block the proposal.

When it came to the proposal to bomb Syria, David Cameron felt obliged to seek the support of the Commons for this probable line of action. The logic of having a coalition Government might have required him to do this anyway, but Graham Allen's precedent also helped considerably. The Prime Minister still enjoys the ability to resort to the use of the relevant Royal Prerogative Power in the future. But yesterday's defeat of the Government's proposals has further helped to ensure that future Government's are likely to feel the need for prior parliamentary permission before they lead us into military action. Well done Graham.


"Mr Graham Allen (Nottingham North) (Lab): I was one of the organisers of the rebellion, and it was with great sadness that I rebelled against my party and my Prime Minister. Will my right hon. Friend concede that the vote was not gifted by the Government, but hard fought for? Many of us worked for many months to obtain the vote. Indeed, there was to be an alternative convening of Parliament in Church House, at which we would have had a critical mass, and only 48 hours before the Government conceded that there would be a vote. We had enough Members to convene a Parliament to discuss the Iraq war, and the former Speaker, Bernard Weatherill, was prepared to chair it. It would have included Members from across the House, including some very brave Conservative Members, Members from the Liberal party and friends from the smaller parties across the political spectrum. But 122 Labour Members voted on the first occasion, and indeed the numbers went up on the second vote, which is unheard of, given the whipping operation against those who did not want us to go to war. It was not a gift of the Government; it was hard fought for ".

Also, see here on the parliamentary arithmetic of yesterday's vote.
Posted by Harry Barnes at 11:53 AM 2 comments: 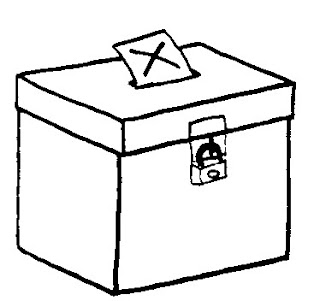 The Institute of Public Policy Research (IPPR) are proposing that first time voting should be made compulsory, yet other voting should remain voluntary. See here.

Whatever, the rights and wrongs are for compulsory voting: the IPPR are wrong to propose having a two-tier voting system, with voting being compulsory for some and not for others. All voters should be given the same status.

Labour is supposed to be interested in the IPPR Report, with a view to attaching the notion to their proposal for Votes for 16s. This would make things even worse. How can we treat 16 year olds as adults and give them the vote, then say because they are not really adults they will be forced into using their first vote? Talk about crossed messages.

Let us have votes at 16, with electoral registration taking place via schools for 15 year olds in readiness for them attaining the vote. Then run courses for the 15 year olds at school about voting and democracy.

Schools, Colleges and Universities can then be used as a means of updating registers. For those who have left educational institutions, a pro-active re-registration system can be put in place. This would track and catch up with people as they move, in order to get them to re-register. Advertising could also be used to alert people to the need to re-register. If Wonga can use the media to sell their dangerous services, then the State can do it for a worthy purpose. If the State adopted relevant legislation, they could oblige the media to run their adverts for free. Electoral Returning Officers could also be funded to arrange for door to door canvassing to encourage re-registration. All registration should be compulsory, with the numbers fined starting to match up to the numbers of non-registrations.

But we should treat everyone in the same way.  Not forced voting for some, but it not mattering for others.

My own preference is for all voting to be voluntary. It is up to political parties, individual candidates, political activists and the media to start interesting people in politics and to show that it can have real meaning to people's lives.  As the Labour Party are now advocating votes at 16, they have a special responsibility on this matter.

A universal franchise is only part of the democratic process. But it is an essential element.
Posted by Harry Barnes at 9:45 AM 3 comments:

Labour and Votes at 16

It is being reported in the media that Labour has come out in support of votes at 16.

There is now a key opportunity to provide important add-ons to the policy, which will (a) ensure full electoral registration for those acquiring the vote, (b) encourage a good turnout from the newly enfranchised and (c) will enable these 16 and 17 year olds names to be retained on the electoral registers as they grow older.

As under-registration is high among the 18-25 age group, the poor, the rootless and ethnic minorities; this also leads to a situation where the boundaries of parliamentary constituencies are seriously distorted. A system of initial registration via schools, with an associated and imaginative educational programme, could start to correct this imbalance and develop a commitment amongst young people to use and improve the democratic process. With almost universal registrations being achieved for 16 year olds via their schools, electoral registration officers could also be given the authority and resources to trace the addresses of the people concerned as they grow older and have often moved their homes. This would have an early impact by ensuring that most of those newly enfranchised would be on the registers as they moved into the under-represented 18-25 age range.  Many of the newly enfranchised 16 year olds will also, of course, already fit (or come to fit) into the categories of other groups who currently suffer from under-registration.

Provision for pro-active electoral registration methods (including relevant education programmes in schools for 15 year olds about the democratic process) can hopefully be added to Labour's welcome commitment.
Posted by Harry Barnes at 12:36 AM No comments: