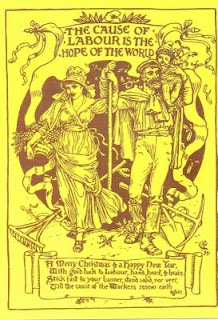 Get Your Socialist New Year Calendar

The Following Is Taken from the ILP's Web-Site. I Have Just Ordered My Copy.

Nov 19th, 2012 | By Matthew Brown | Category: Articles, Frontpage, News
Iconic political cartoons from the 1890s and 1920s are featured in a new wall calendar published by the ILP to mark our 120th anniversary next year.

Launched to celebrate the founding of the Independent Labour Party in Bradford in 1893, the A4 calendars are illustrated by biting socialist cartoons first published in Keir Hardie’s newspaper, Labour Leader, in the 1890s and its ILP successor, New Leader, in the 1920s. They are not only a poignant reminder of our past but retain significant political relevance today.
The founding conference of the ILP on 13 January brought together local ILPs which had already been established, particularly in the north of England, plus the Scottish Labour Party and many individuals eager to promote its cause. The ILP became Independent Labour Publications in 1975.
The ILP 1893-2013 wall calendars cost £9.00, including postage and packing, from Independent Labour Publications, PO Box 222, Leeds LS11 1DF. Cheques payable to ‘ILP Trust Ltd’.
To buy a calendar by PayPal, click here.
For more information email: info@independentlabour.org.uk

—-
To read more about the ILP’s history visit our History section here.
To mark the anniversary, the ILP will also be publishing an updated version of The ILP: Past & Present in the new year while this website will feature a series of biographical articles on significant ILPers from Labour history.
More details of 120th anniversary publications and events will be published here in due course.

Posted by Harry Barnes at 12:28 PM No comments:

Where Prisoners Have The Vote

What makes us different, apart from prejudice?
Posted by Harry Barnes at 3:28 PM No comments: