An Extra Argument For Votes At 16 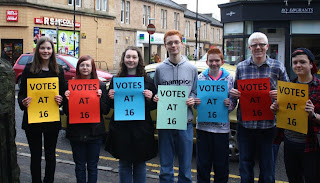 Yesterday in the Commons, there was a two and a half hour back-bench debate on whether people should be entitled to have the vote from 16 years of age. As the Commons was acting as a debating society and was not dealing with legislation, only 25% of its MPs turned up to vote. The vote for the proposal was carried by 119 votes to 46. Nevertheless despite the boycott, it was a fruitful effort for those who support the principle. It is now a proposal that is supported by almost all parties, except the Conservatives. Steve  Williams the Lib-Dem MP for Bolton West moved the proposal and he has also put forward a Bill to seek to impliment the measure. It is entitled the "Voting Age (Reduction to 16) Bill"  (Bill 125). Whilst the Conservative-dominated Government are likely to kick the current efforts into the long grass, what has just happened can only aid the cause. I feel, however, that an important point in favour of Votes at 16 was missed both in the debate and in the related Bill. I have put my case in an email to Stephen Williams, with copies being sent to several other MPs who share his stance. Whether I get any responses (positive or otherwise), we will have to wait and see.

There is an important argument in favour of votes at 16 which was missing from yesterday's debate. Namely, that providing voting rights from that age could be used as an essential step to tackle the serious problem of voter under-registration. The Electoral Commission has reported that at least 6 million people are missing from electoral registers. Yet we also see that the under-registration figure is likely to be larger than this, as census details have revealed 1.57 million people in England and Wales have second addresses and this will entitle many of them to double registration. If, say, 1 million throughout the UK have done this, that means that under-registration is actually over the 7 million mark.

As under-registration is high among the 18-25 age group, the poor, the rootless and ethnic minorities, this also leads to a situation where the boundaries of parliamentary constituencies are seriously distorted. A system of initial registration via schools, with an associated and imaginative educational programme, could start to correct this imbalance and develop a commitment amongst young people to use and improve the democratic process. With almost universal registrations being achieved for 16 year olds via their schools, electoral registration officers could also be given the authority and resources to trace the addresses of the people concerned as they grow older and often moved their homes. This would have an early impact by ensuring that most of those newly enfranchised would be on the registers as they moved into the under-represented 18-25 age range.  Many of the newly enfranchised 16 year olds will also, of course, already fit (or come to fit) into the categories of other groups who currently suffer from under-registration.

Provision for pro-active electoral registration methods (including relevant education programmes in schools for 15 year olds about the democratic process) can be added to your Private Members Bill if it ever makes progress. It could also be added to any later parliamentary initiatives on the matter.

I am circulating this e-mail to Natascha Engel, who succeeded me as the MP for North East Derbyshire - as well as to certain others who have shown a positive interest in Votes at 16.

All the best,
Harry Barnes.
Posted by Harry Barnes at 3:06 PM 23 comments: 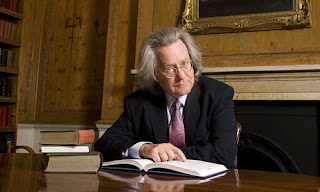 This seems to be clear proof that philosophy can't provide all of the answers. Well, once more, this particular philosopher can't.
Posted by Harry Barnes at 10:48 AM No comments: