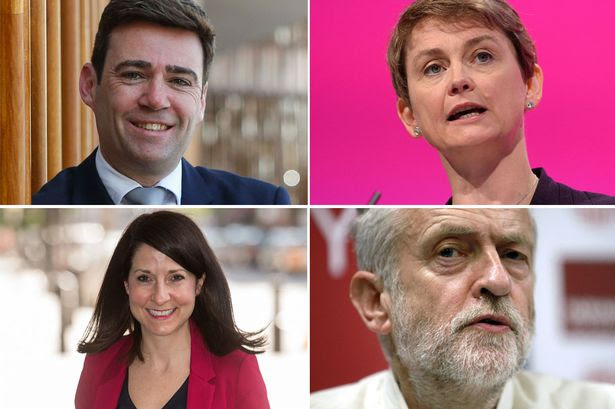 The Campaign to obtain "Manifestos Of Intent" from the Labour Leadership Candidates (as shown here) received a limited success.

Andy Burnham has issued what is clearly a Manifesto, as he did for his campaign for the leadership in 2010. His current document is eight pages long and as he delivered this, it deserves to be examined carefully. See here. Then there is also his Leadership Campaign Web-site to examine here. Added Saturday 15 August. Also circulated via the post as an eight page booklet.

Yvette Copper circulated a letter by post dated 3rd August, which is some 800 words long and probably qualifies as a "Minifesto". Her Leadership Campaign Web-site with more in it, is here. Added Friday 14 August. Today Yvette has circulated an 8 page booklet to members, on the penultimate page it provides an eight point programme.

Jeremy Corbyn has issued a number of policy documents in specific areas, which in total are much longer than Andy's Manifesto. But whilst detailed and important, they may be felt to cover less total ground than Andy's. They include "Protecting The Planet", "The Economy in 2020" and "Housing Policy". There are a further three documents which unfortunately are defective when printed off. But they can be read on the screen. These are "Housing Policy", "Northern Future" and "A Better Future For Young People". To seek out all these documents and other material, see his Leadership Campaign Web-site here. Added Friday 14 August. Today Jeremy has circulated material to members, it includes a ten point programme under the heading "Standing To Deliver". It can also be found here .


Liz Kendell had an article in the Independent on 2nd August, entitled "The five causes that Labour must put at the centre of our vision for Britain's future". See here. Her Leadership Campaign Web-site is here.


Looking ahead to the next Leadership Contest, there is a need for a requirement for "Manifestos Of Intent" being issued by the candidates, to appear in the Rules of the Labour Party. Amendments for this purpose can be submitted for the Agenda of the 2016 Labour Party Conference.
Posted by Harry Barnes at 2:56 PM 6 comments:

Any More On Easington Colliery?

If anyone (especially from America) wishes me to restore my item "More On Easington Colliery" which first appeared on 10 January 2010, then please let me know via the Comment Box below.
Posted by Harry Barnes at 8:58 PM 2 comments:

The Next Labour Leader ?

The BBC reports that the candidates for the Labour Leadership have obtained the following endorsements from Constituency Labour Parties (CLPs).


That amounts to a total of 387 endorsements. But there are many more CLPs than that.

There is a Labour Party operating in Northern Ireland, but it does not have a constituency structure. As there are 650 parliamentary seats in the UK as a whole, when we deduct the 18 Northern Ireland seats from these we arrive at 632 for Britain. In a few cases CLPs may be virtually moribund and may not have met to consider the issue of endorsements. My own CLP met, but when the issue of endorsement was raised it unanimously accepted that it would not pursue the matter.

245 CLPs have failed to give support to any of the candidates. Yet it is reasonable to assume that at the very least 200 of these have enough of an organisational structure to have submitted supportive endorsements if they had wished to.

So something over a third of reasonably effective CLPs have failed to submit endorsements. This places a question mark over the significance of the BBC's figures. In any case endorsements tell us only a limited bit of the story. They are not votes - for these an in the hands of individual members, those recruited for voting purposes by their affiliated Trade Unions and those otherwise signed up as Labour supporters.  CLPs are also made up mainly of delegates appointed by members who attend Branch Meetings or local meetings of affiliated bodies. Unfortunately, the great bulk of Labour Party members don't attend such meetings.

So Corbyn's lead in CLP endorsements, seems to indicate that he has the express support of something in the range of the majority of a quarter of those who attend Labour Party Meetings. There is still a big question as to whether this support will influence the silent majority or is reflective of its views.

Jeremy does, however, seem to have a clear advantage in the contest - the enthusiasm of many of his supporters.

Posted by Harry Barnes at 2:36 PM No comments: