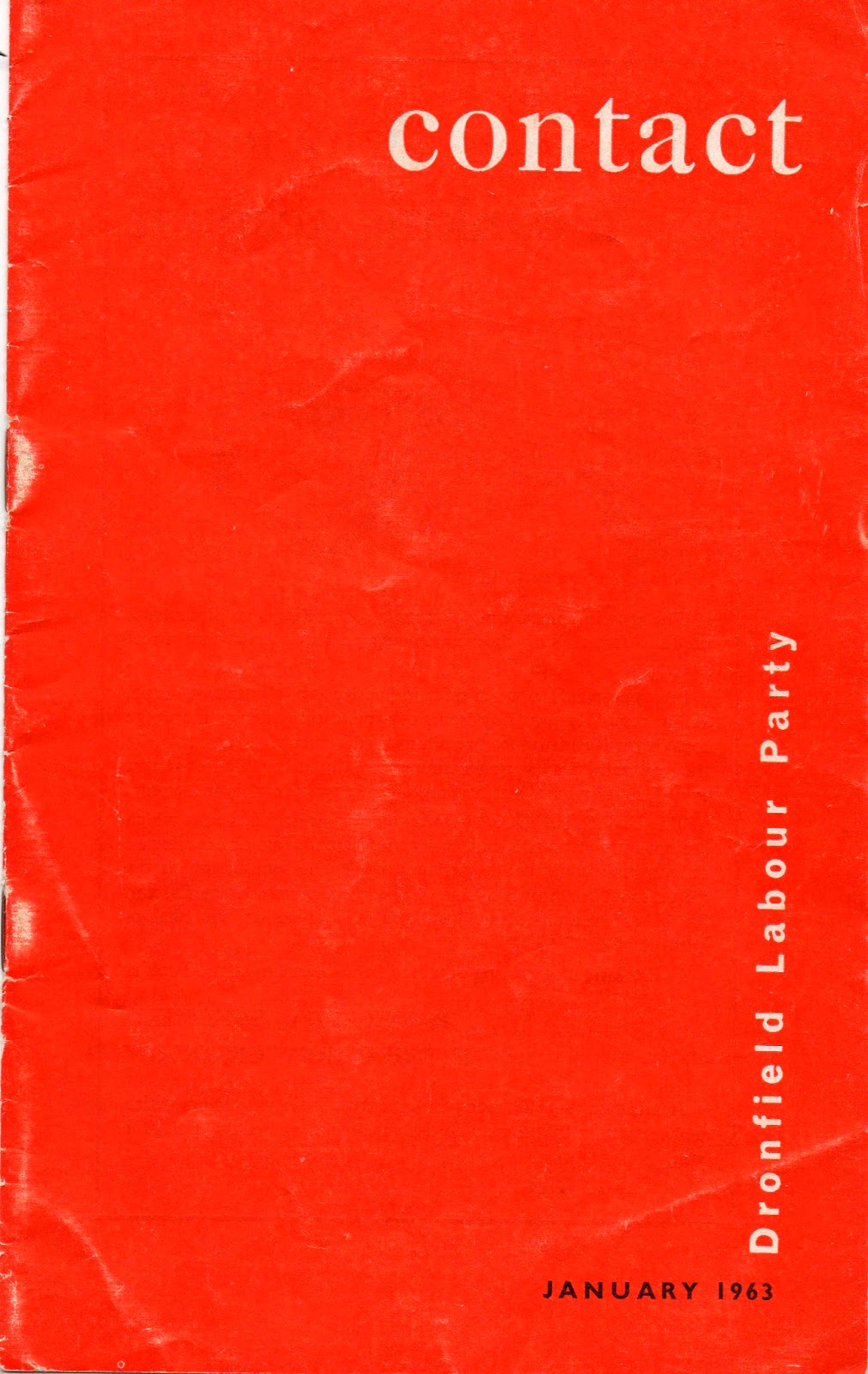 In 1962, the local Labour Party at Dronfield in Derbyshire commenced the publication of a printed magazine which was called "contact" (in small case). With a red cover, it came out roughly on a monthly basis and was printed in Derby. Amongst the copies I hold is the second edition, which was published in January 1963. It is a neat document. Its 20 pages were just 8 inches by 5. As  it was delivered door to door to the towns 3,000 homes, it attracted plenty of advertising. Almost half its pages were taken up with no less than 25 adverts. All but three of these were for local Dronfield services, such as Dunham's hairdressers on Dronfield's main Chesterfield Road.

Bill Gilbert wrote articles on Dronfield's past, but the magazine otherwise tended to concentrate on the prominent activities of the local Labour Party, the Dronfield Trades and Labour Council, the Dronfield Young Socialists and also on local government matters effecting the Derbyshire County Council and the Dronfield Urban District Council.  Whilst the later had operated since 1894, Labour had only first obtained a majority on the Council in 1958 and its initial breakthrough only lasted for a period of 18 months. Then Labour reclaimed control in 1962 - with the Contact Magazine emerging later in that year. By the 1964-5 session, Labour controlled the Council by 10 seats to the Conservatives 3.

The editorial board of the Contact Magazine was made up of five people - Brian Morgan, Arthur Smith, Norman Rutherford, Eric Chetwynd and Fred Machin. The majority of these served periods as local Labour Urban District Councillors.  In addition to their standard editorial work they were connected with (a) liason with the printers, (b) attracting and maintaining advertisers, (c) fund raising exercises, (d) seeing that the magazine was delivered to every home in Dronfield.

In addition to all these efforts helping to aid Labour's cause in Dronfield, there was a further spin off when Labour was at its peak in Dronfield.  This was the establishment in the town of what became a large and viable social club, appropriately named the "Contact Club".  The idea for the Club was first put forward by Bill Gilbert. At the time there was an Old Comrades Club in the High Street in Dronfield which had existed since the 1920s, but it was on its last legs. So in 1964, a deal was struck to take over its debts of £25 and establish a "new" Contact Club. The finances for the full transformation were provided by a loan of £100 from the North East Derbyshire Constituency Labour Party and the support of Wm. Stone's Brewery, who installed a bar and furnishings for the main room. Money was also collected and kept in a dried milk tin.

A prominent figure in these developments was Lou Howson. He was a local Labour District Councillor, who later became Secretary of the North East Derbyshire Constituency Labour Party and a Derbyshire County Councillor. In a letter written some ten years ago well after his return to Scotland, he wrote that initially a small group, including Bill Gilbert, Fred Broadhead and himself "set about patching the whole place up and installing central heating. We decorated throughout. We applied for a licence which came through about August 1964. We appointed a Committee and Eric Chetwyn was Membership Secretary and Entertainment Secretary. We recruited our first 40 odd members and opened for business on a Saturday night..(on what seems to have been 15 August)... Eric had booked a group for our first Sunday night. The sound reverberated around the town and we had to turn people away. Within a short time we had the maximum membership and began to search for new premises". Lou and Tom Staveley were the Club's original trustees. A position which, Graham Baxter, the leader of the North East Derbyshire Council now holds.


Within three years the Contact Club had moved to its present imposing site on Snape Hill Lane. It was a substantial venture. What achieved this massive transformation is explained in an article which appeared in "The New Contact" in Autumn 1972.  It states - "What had the Contact Club got at this stage to,plan a £30,000 venture? Money? Little or none. Expertise? A committee with two year's experience of running a small club on a shoestring. Not the most heartening of assets, so what decided them? Only an urge of a body of people to create a social centre using the most important asset of all; an abundance of energy and a social conscience".

As shown on a plaque in the entrance to the Contact Club, Manny Shinwell undertook the formal opening of the present site on 12 August, 1967. I was away teaching a Summer School at Coleg Harlech at the time and I missed that fine occasion. I was doubly sorry because I had known Manny well, as I originated from the area in County Durham which he represented in parliament. But although I was living in Sheffield at the time, I had had the good sense to join the Contact Club as it moved into its site on Snape Hill Lane. I regularly attended the Club's discussion meetings on a Sunday Morning which were held in the Lounge.

Within a couple of years Ann, Stephen (aged one) and myself had moved to Dronfield. The Contact Club was a major attraction. Over the years it served as a centre for May Day activities, public meetings, electoral organisation, plus Labour Party meetings and discussions. I currently organise the continuance of the later in the Committee Room, carrying on the tradition I first experienced on Sunday mornings 47 years ago. No one owes a greater debt than I do to the Contact Club for the considerable support it gave to me in my 18 years as its local MP.  So I fully wish the Club all the very best for its next 50 years.

Too many peoples names are missing from this tribute to the Contact Club, for it has always involved a collective activity. But at one time the Club was synonymous with the name of its long serving secretary, Harold Garbutt. His tradition is carried on today by Pete Honeybone.

The final word needs to go to Lou Howson. Ten years ago he wrote "At a meeting in Ayr a few years ago regarding the setting up of a Labour Club, a man stood up and advised that we go and visit the 'best Labour Club in Britain' in a place called Dronfield. I got an ego boost when I showed my life membership card".

The Day After War Broke Out

It is a hundred years ago today since Britain entered the First World War. This event and the military conflict which ensued, is at the moment being brought to our attention solidly by the media. However, the war also brought in its wake massive social change. Up to the outbreak of the war,  the main form of employment for women (and the leading form of employment throughout  the country itself) had been domestic service. But to replace men who had rushed to sign up to fight for their country, women then entered into a wide range of employment which they had mainly been excluded from in the past. As the war ended, they gained their first major form of enfranchisement.

Then dramatic events shaping the political future of the Labour Movement took shape around the time that Britain declared war on Germany on 4th August, 1914.

Sunday, 2nd August - a massive anti-war demonstration was held in Trafalgar Square addressed by Keir Hardie (below), Will Thorne, George Lansbury and Arthur Henderson - who was the General Secretary of the Labour Party. By that time the Joint Board of the Labour Party, the Trade Union Congress and the General Federation of Trade Unions had summoned a representative Conference for 5th August to agitate against British involvement in the the war.

Monday, 3rd August - with that day's German invasion of Belgium, Ramsay MacDonald made what was to be his last parliamentary speech as the then Leader (known as Chairman) of the Parliamentary Labour Party. He argued that "this country ought to have remained neutral".

Wednesday, 5th August - Ramsay MacDonald resigned as Labour Leader (only being re-appointed to that role on 21 November 1922). He was replaced by Arthur Henderson. MacDonald resigned as he opposed our entry into the war, whilst the majority of the Parliamentary Labour Party either supported the war effort or accepted that they would have to work through what was then a fait accompli. Henderson came to look for a peace agreement.

The Labour movement meeting that had been convened for 5th August to organise against Britain's entry into the war, found itself faced with a stark new situation. So it changed tack and set itself up as "The War Emergency Workers' National Committee" in order to safeguard working-class interests during the period of the conflict. Arthur Henderson was appointed as Chairman, until he entered the Coalition Government in 1915.  Ramsay MacDonald was eventually appointed to serve on the Committee from the Labour Party itself.

Thursday, 6th August - "Labour Leader" the newspaper of the Independent Labour Party (ILP) put forward its case against the war as shown here. The ILP was affiliated to the Labour Party.

"The War  Emergency Workers' National Committee" was a remarkable body which covered a wide variety of people. Some were solidly pro-war. Others generally supported the war effort, but looked for avenues to reach a peace settlement. Then others opposed the war, either for pacifist or political reasons.  Yet due to the War Emergency Commission concentrating their efforts on the protection and advancement of working class interests, they found a remarkable area of common ground - outside of attitudes to the conflict itself.

Sidney Webb (who was often at his very best as a committee man) was immediately elected to the Emergency Committee. He soon produced a comprehensive set of relevant demands entitled "The Workers And The War" which can be found here. In 1915 he was then appointed to the National Executive Committee of the Labour Party, working closely with Arthur Henderson and producing both the traditional Clause 4 of the Labour Party Constitution, calling for the "common ownership of the means of production, distribution and exchange". He also shaped Labours Manifesto in the 1918 General Election with his publication "Labour and the New Social Order".  Although Sidney Webb held a solid role through the Fabian Society as a leading socialist intellectual, it was his work with the Emergency Committee which finally drew him into the centre of Labour Party activity and its (then) democratic socialist development.

The Emergency Committee pressed solidly for working class interests and concerns. It also shaped future approaches within the Labour Movement, even though it took a Second World War to create the conditions which went on to lead to full employment, the welfare state and the public ownership of key industries. A heritage, much of which has been undermined in recent years.