The Day After War Broke Out

It is a hundred years ago today since Britain entered the First World War. This event and the military conflict which ensued, is at the moment being brought to our attention solidly by the media. However, the war also brought in its wake massive social change. Up to the outbreak of the war,  the main form of employment for women (and the leading form of employment throughout  the country itself) had been domestic service. But to replace men who had rushed to sign up to fight for their country, women then entered into a wide range of employment which they had mainly been excluded from in the past. As the war ended, they gained their first major form of enfranchisement.

Then dramatic events shaping the political future of the Labour Movement took shape around the time that Britain declared war on Germany on 4th August, 1914.

Sunday, 2nd August - a massive anti-war demonstration was held in Trafalgar Square addressed by Keir Hardie (below), Will Thorne, George Lansbury and Arthur Henderson - who was the General Secretary of the Labour Party. By that time the Joint Board of the Labour Party, the Trade Union Congress and the General Federation of Trade Unions had summoned a representative Conference for 5th August to agitate against British involvement in the the war. 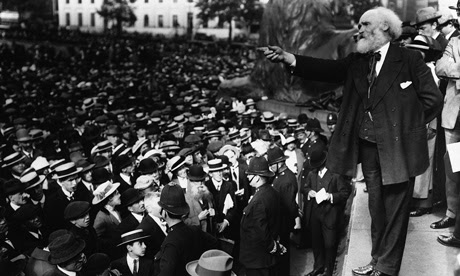 Monday, 3rd August - with that day's German invasion of Belgium, Ramsay MacDonald made what was to be his last parliamentary speech as the then Leader (known as Chairman) of the Parliamentary Labour Party. He argued that "this country ought to have remained neutral".

Wednesday, 5th August - Ramsay MacDonald resigned as Labour Leader (only being re-appointed to that role on 21 November 1922). He was replaced by Arthur Henderson. MacDonald resigned as he opposed our entry into the war, whilst the majority of the Parliamentary Labour Party either supported the war effort or accepted that they would have to work through what was then a fait accompli. Henderson came to look for a peace agreement.

The Labour movement meeting that had been convened for 5th August to organise against Britain's entry into the war, found itself faced with a stark new situation. So it changed tack and set itself up as "The War Emergency Workers' National Committee" in order to safeguard working-class interests during the period of the conflict. Arthur Henderson was appointed as Chairman, until he entered the Coalition Government in 1915.  Ramsay MacDonald was eventually appointed to serve on the Committee from the Labour Party itself.

Thursday, 6th August - "Labour Leader" the newspaper of the Independent Labour Party (ILP) put forward its case against the war as shown here. The ILP was affiliated to the Labour Party.

"The War  Emergency Workers' National Committee" was a remarkable body which covered a wide variety of people. Some were solidly pro-war. Others generally supported the war effort, but looked for avenues to reach a peace settlement. Then others opposed the war, either for pacifist or political reasons.  Yet due to the War Emergency Commission concentrating their efforts on the protection and advancement of working class interests, they found a remarkable area of common ground - outside of attitudes to the conflict itself.

Sidney Webb (who was often at his very best as a committee man) was immediately elected to the Emergency Committee. He soon produced a comprehensive set of relevant demands entitled "The Workers And The War" which can be found here. In 1915 he was then appointed to the National Executive Committee of the Labour Party, working closely with Arthur Henderson and producing both the traditional Clause 4 of the Labour Party Constitution, calling for the "common ownership of the means of production, distribution and exchange". He also shaped Labours Manifesto in the 1918 General Election with his publication "Labour and the New Social Order".  Although Sidney Webb held a solid role through the Fabian Society as a leading socialist intellectual, it was his work with the Emergency Committee which finally drew him into the centre of Labour Party activity and its (then) democratic socialist development.

The Emergency Committee pressed solidly for working class interests and concerns. It also shaped future approaches within the Labour Movement, even though it took a Second World War to create the conditions which went on to lead to full employment, the welfare state and the public ownership of key industries. A heritage, much of which has been undermined in recent years.

Harry, some questions for you.
Wednesday, 5th August 1914. Did Ramsay MacDonald resign as Labour Leader ? Or was he forced out? Did he go because he feared that the nascent Labour Party that he had spent umpteen years building would be wrecked by his (and other prominent people in the movement) anti-war views ? May his position be compared with Kautsky ?

Graham, the source I used on MacDonald's resignation was GDH Cole's "Labour in War Time" (London, G Bell and Sons, 1915) pages 30-32. Earlier material shows that he is refering to August 5th, 1914. See https://archive.org/details/labourinwartime00coleiala

According to Austen Morgan in "J. Ramsay MacDonald (Manchester University Press, !987, pages 59-60), the NEC of the Labour Party agreed on 5th August by 8 votes to 4 to aim "to secure peace at the earliest possible moment ...", but "That evening, however, the parliamentary party decided, by a majority, that it would support the war credits, which were to be voted the following day. Thereupon Ramsay MacDonald resigned in despair as its Chairman, though he remained on the National Executive as Treasurer.

A fuller explanation of events and MacDonald's general attitude is likely to appear in "Ramsay MacDonald" by David Marquand (Jonathan Cape), which is his major biography. Unfortuneately, I don't hold a copy. He may give the answer you seek about MacDonald's reasoning and approach.

Graham : The Summer 1914 edition of the Bulletin published by "Labour Heritage" contains a detailed report on pages 12 to 16 of a talk by John Grigg entitled "Ramsay MacDonald and the First World War". It should eventually appear on their web-site here - http://www.labour-heritage.com/bulletins.php Alternatively, Labour Heritage can be contacted via the web-site.

Basically, MacDonald resigned the leadership because his stance on the war lost out in the PLP and this was later confirmed in the Labour Party itself, but he continued to play a central role within Labour - being able to work with people such as Arthur Henderson (the new leader) especially given Arthur's eventual efforts to move towards a peace settlement. Although there were tensions within the Labour Party, whose majority supported the war effort (and within the ILP whose majority opposed it), the work of the "War Emergency Workers' National Committee" (which my blog item stressed) showed how elements across both wings of the Party could work together. Then from 1916, anti-conscription attitudes emerged and war weariness began to grow, so some of the differences between elements on the two sides lessoned. There were industrial struggles during and after the war which aided a growing commitment by working people to Labour - although it had to overcome the manipulated Coupon Election in 1918 and the brief euphoria of many working people following the "winning" of the war.