How To Improve Iraq 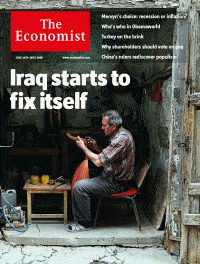 The lead article in this week's Economist (left) is entitled "Iraq starts to fix itself". It is backed up by a briefing article on what it sees as recent changes in Iraq, which is entitled "Is it turning the corner?". The analysis is, however, a cautious one which ends -

"Iraq's future is still full of pitfalls. The sectarian chasms remain deep, the wounds of strife raw. But for the first time since the insurgency against the Americans took off, the tide, which can quickly ebb, is flowing in the direction of the new order".

In a critical frame of mind, these articles are well worth studying. Hot from discussing the issue of Iraqi Trade Unionism with a group of Norwegian Trade Unionists at Wortley Hall in South Yorkshire, my response to the Economist's articles is as follows.

If "Iraq has started to fix itself", there is an urgent move it could make to extend this process. The Iraqi Government could both recognise and consult with its Trade Union Movement.

Currently Trade unions are banned in the dominant public sector of the economy under a law inherited from Saddam Hussein. In case the law does not fully bite, Trade Union funds have been sequestrated by the State in a decree adopted in 2005; whilst the Iraqi Government has persistently refused to adopt alternative ILO-compliant laws. Even Trade Union elections in the smaller private sector are to be interfered with this summer by restrictions on who can stand as candidates. Also Trade Union leaders trying to work in the Basra Oil Industry have been relocated elsewhere following their organising opposition to oil privatisation.

Free Trade Unions have a vested interest in civil liberties, democratic practices and non-sectarianism. Thankfully the Iraqi Government's controls do not apply to the federal unit of Iraqi Kurdistan, where the percentage of workers in Trade Unions is higher than in Britain and where they have made their own contribution to a section of Iraq which has been fixing itself for some time."

It should be noted that my source is the TUC.
Posted by Harry Barnes at 4:26 PM

Do you see any candidates or parties that will be more tolerant of trade unions in Iraq that might gain seats or office in the upcoming Iraqi election?

Mutant Pacifist: At the General Election the Kurdistan Alliance's List obtained 19.3% and the secular Iraqi National List 9.1%. These (and successors) are the basis of at least an acceptance of trade unionism. There is little scope for a further advance of the Kurdistan Alliance (who more or less swept the board in Iraqi Kurdistan), so hopes would need to centre on the type of forces who were associated with the Iraqi National List under Allawi. The Sunni political groups (whose total was 21.5%) might be willing to join in, if they saw trade unionism as a way of reigning in on the Shia's political power. 50 years ago, trade unionism was at its strongest amongst the Shia who were the backbone of the impoverished Iraqi working class. But with the Shia today, a religious/ethnic form of politics is in the ascendancy. The hope of more Shia turning back to sympathise with trade unionism could come from perceived failures of their Dawa Party and the like.

Yet even in the current Iraqi political set up, their current Government might shift its ground under international pressures. The problem is that whilst since 2003the UK Government (when pressed) have always made favourable noises about Iraqi trade unionism, it isn't clear how far they have pressed the issue in private - whilst the USA administration seems to have come up with much less even in the way of open verbal support.

Thanks HB. Thanks for your very informative comments on Mojo.

Do you have any perspectives on:

By the way, the latest on the Aghan security forces is here: http://www.longwarjournal.org/archives/2008/06/afghanistan_national_1.php

The latest on the Iraqi Security Forces in here:
http://www.longwarjournal.org/archives/2008/06/iraqi_security_force_14.php

As you know, more than 75% of Iraqis in recent polls want the US to train and equip the the ISF, and fight AQ inside Iraq. Do you agree with this?

Are you impressed by the performance of the ISF and ANSF?

Why are aren't other countries doing more to train and equip the ISF? The GoI has asked them to help, and they refuse to help (in any serious way.)

How would you persuade them to help HB?

The other issue is that the IA is increasingly emerging as one of the highest quality militaries in the Arab world, and they are no longer interested in training assistance except from the most capable global militaries.

Anand: On Thomas Friedman's article, I feel that the next best democratic system to Isreal in the Middle East is Turkey. In practice all democratic systems have shortcomings and some that claim the title are clearly shams (as is being tested to possible destruction in Zimbabwe at the moment). Iraq seems to me to be a very flawed democratic system, but comes about third in its immediate area. Its high spot is in Iraqi Kurdistan and amongst its lows is the response at the centre to Trade Unionism. The "Long Wall Journal" has a fair conclusion on the ISF being "better than many claim, but still a work in progress". Other nations might be keener to join in training the IA and the ISF if they see coalition forces moving to training as the core of their activities and as a means of preparing their eventual withdrawal - a withdrawal that should not be obscured by efforts to obtain permanent bases in Iraq.

On Afganistan, I have submitted the following letter to the "Morning Star" in response to an article they ran from Labour M.P. Jeremy Corbyn attacking the position of Labour MP and Defence Minister Des Browne. I know the two of them well. (Unfortunately, there is no link to Jeremy's typical "troops out" article).

"In his article "Afghanistan: the Next Iraq?" (June 16), Jeremy Corbyn points to the oppressive nature of the Taliban when they were in power. How does he feel that the left should now act to try to contain or remove their current influences?

Does he feel that proposing negotiations is a way forward? Does he feel that we should give moral and practical help to alternative progressive forces in Afghanistan and who does he see these as being? Should we help in a genuine rebuilding of the social fabric of the nation and how do we further this? Above all, if there is scope for pursuing these (or alternative avenues) will this be easier or more difficult if British troops are withdrawn or retained? And why?

In short if Des Browne's approach is counter-productive, then what will be productive?".