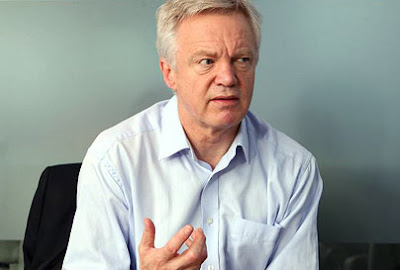 If Parliamentary conventions, electoral law and political practicalities are adhered to, then the Haltemprice and Howden Bye-election called by the resignation of David Davis (above) will take place on either 10th or 17th July.


There are a number of factors which favour these dates -

1. They are Thursdays and that is the day of the week on which we normally hold both General Elections and Bye-elections.

2. Parliament goes into recess on Tuesday 22nd July and the Conservatives are likely to wish to hold the Bye-election before then. This is certainly in the interests of David Davis, for if the vote took place during the recess (and as expected he wins) he would then be unable to take his seat until sworn into the Commons afterwards. Not only would he be unable to act as an MP in the meantime, but he wouldn't again be paid his MP's salary until then. The recess lasts until 6th October.

3. To secure a Bye-election on either of the above dates, then the writ to do this needs to be determined by the Commons sometime between tomorrow and the following Monday. If the writ is acquired early next the week, then we are in for a vote on 10 July. If this happens later and by 14 June, then the Bye-election is pushed back to 17 July.

4. Although any MP can move the writ, by convention (in this case) it will be moved by the Conservative Chief Whip. It is also normal for the proposal to be passed on the nod. Although in theory, a division could be forced and the writ refused. That would create an interesting situation. There is a convention that the writ will be moved within 3 months of a vacancy arising. But this isn't a legal requirement.

Note: In the Thatcher era, Dennis Skinner once moved a writ and debated it at length in front of another measure which he succeeded in blocking. He then withdrew his motion for the issue of the writ.

5. The timetable from the time of the writ being issued is as follows -

In calculating the above days, Saturdays, Sundays and Bank Holidays are excluded.

I thank Modernityblog for suggesting that I post an item on this.

Update 5.40pm 19 June The writ for the Haltemprice and Howden Bye-election was finally carried on the nod in the Commons at the start of business today. This is a full week after David Davis initially announced his intention to resign. Nomination papers will need to be submitted by 26 or 27 June depending upon when the writ is officially received by the Returning Officer. This should trigger the start of the candidates' restricted and eventually checkable electoral expenditures. The Bye-election should now take place on 17 July. On the issuing of the writ, this is the relevant extract from today's Common's Hansard -

That Mr. Speaker do issue his Warrant for the Clerk of the Crown to make out a new writ for the electing of a Member to serve in this present Parliament for the County Constituency of Haltemprice and Howden in the room of the Right Honourable David Michael Davis, who since his election for the said County Constituency has accepted the Office of Steward or Bailiff of Her Majesty’s Three Chiltern Hundreds of Stoke, Desborough and Burnham in the County of Buckingham.—[Mr. McLoughlin.]

Update 10.22am 21 June According to the BBC, the bye-election date is 10 July. This just fits in with the timetable I provided in point 5 above. Sorry for my earlier miscalculation.
Posted by Harry Barnes at 4:06 PM

Harry,
Isn't it the case that Davis hasn't actually resigned yet? As far as I know he is yet to apply for the Chiltern Hundreds (prop A. Blair) isn't this so? How does this affect your timescalem above?

a very nice summary, I was scouring the Web for something like this and you've explain it so well.

Pete: You seem to be correct. There is no mention in "Votes and Proceedings" covering the business of the Commons on Thursday and Friday of his taking the Chiltern Hundreds. Whilst on the official Parliament Home page (and at his blog which it links to) he is still described as an M.P. He needs to take the Chiltern Hundreds in the coming week, if the writ is to be issued for a bye-election in my time-scale. Early action on both fronts fits in with 10 or 17 July - the 10th if action is taken early this week, the 17th if it is later and completed by next Monday.