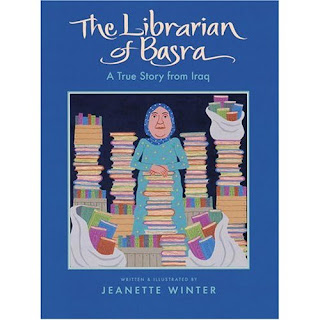 Today's news that the final procedures are in motion which will lead to the withdrawal of British Troops from Iraq, takes me back to my own military service in Basra.

I was undertaking my National Service and I arrived at our Movements Unit on the banks of the Shatt-el-Arab river in February 1955, leaving 20 months later in October 1956. I was there in a peaceful period and only ever heard one shot fired in anger. A prisoner escaped from the surrounding Iraqi Army Camp and was pursued by Iraqi Troops. When he dived into the river to escape, a shot was fired at him. Luckily it missed.

It was only as I was leaving Iraq and was in transit via the then RAF camp at Habbaniyah that troubles emerged. This resulted from the build up to the Suez Crisis which came to involve Britain playing a key role in the invasion of Egypt.

But in the earlier peaceful conditions which I experienced one of my greatest joys was a weekly visit to the centre of Basra when I invariably went to an English Bookshop run by a bookseller from India. I would collect from him my regular order of the New Statesman in its Air Mail edition published on rice paper, plus dated copies of the Observer and Reynolds News which had arrived by sea.

He had a collection of Rationalist Press Association books from which I made regular purchases. I would find plenty of other works to purchase such as "War and Peace" and the Complete Works of Shakespeare. I also ordered books from him that had captured my interest; especially those by James Joyce and George Bernard Shaw. The only disappointment I had was when I ordered a copy of Karl Marx's "Das Kapital" and he told me the following week that the local Chief of Police had vetoed the purchase. 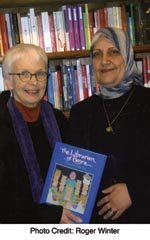 Many Iraqis have a great love of books and my own experiences with books in Basra make me particularly attracted to a modern true story which is written and illustrated for children of all ages. It is about Alia Muhammad Baker, the librarian who saved 70% of the books in Basra's Library from the bombs. See her photo on the right along with that the author and illustrator Jeanette Winter. Full coverage of the work (whose cover is pictured above) can be pursued via the link here and (better still) downloaded here.
Posted by Harry Barnes at 11:09 PM

Always good to read your posts.
Saving books is always a worthy cause. Seeing the Islamist thugs burning books during the cultural revolution was the start of my political activism, because it just seemed wrong to me for someone to burn books.

Dr. Shapour Bakhtiar came face to face once with someone who had been in the Khomeini camp and had ransacked his house and burned his books. When the repentant asked Dr. Bakhtiar what can I do for you to forgive me, he said 'Read those books that you destroyed in my house'

Azarmehr : One of the best things that happened to me as a schoolboy was that at 12 our class teacher took us into the school library and told us to borrow a book and read it. I followed his instructions and took out an adventure story by John Buchan. I was then hooked on reading, so I now have a houseful of books. The reason dictatorships burn books is because there is nothing more damaging to their regimes than the spread and exchange of ideas. I will remember Dr. Bakhtiar's fine response.