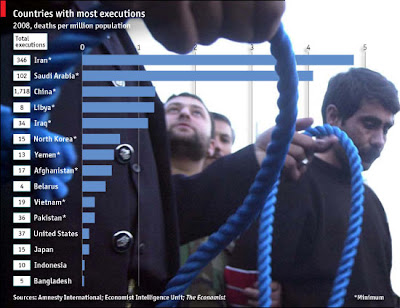 Click onto the above to enlarge and read the statistics of judicial murders.

Amnesty has published its report on "Death Sentences and Executions in 2008" stating - "Last year 2,390 people were executed in countries around the world. This represents a significant increase since 2007 with more countries in Asia using the death penalty than anywhere else. Amnesty’s annual death penalty report also reveals that at least 8,864 people were sentenced to death. The death penalty is the ultimate cruel, inhuman and degrading punishment. Beheadings, electrocutions, hangings, lethal injections, shootings and stonings have no place in the twenty-first century."

China carried out at least 1,718 executions, 72% of the global total — the actual number (as in many other countries) is believed to be much higher. But if the populations of the 15 countries that carry out the most executions are taken into account, Iran and Saudi Arabia emerge as more zealous employers of capital punishment than China. At the top appears the hideous league table for executions per million for the "top" nations executions.

WHat a depressing table. I am not surprised that ran tops the per capita list. I am dismayed that Iraq is up there.

jams o donnell; there is more unhappy news from Iraq on the item I have put up today.