Up For The Cup

Only 12 More Wins And Its Ours 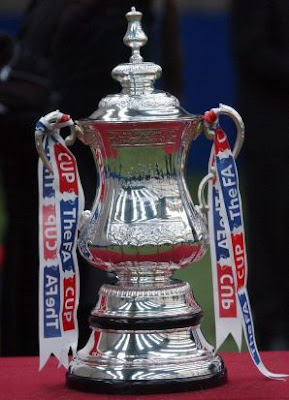 On Saturday the sun shone at and on Sheffield FC. They progressed into the Second Qualifying Round of the F.A.Cup with a 3-2 win over Colne.

Yet at half time we led 3-1. With the rest of the home crowd I thought we were in for an easy win, especially as Colne play below us in the non-league pyramid in the same division as AFC Flyde whom we hammered 4-0 in the previous round. In the end, however, we were glad to hold on for a narrow victory.

Colne grabbed a lead only five minutes into the game, which was in conflict with everything else which happened in the first half. Our central defender Greg Wright upended Liam Garbutt when the Colne striker had already failed to control the ball. Martin Brodrich converted the penalty.

The game then, however, settled into one way traffic. Within 2 minutes Daz Winter equalised with a fine header. On 20 minutes our striker Mick Goddard prodded a ball home - he has yet to score from more than 8 yards. Five minutes later we were 3-1 up from a Scott Partridge header. We were coasting it.

But then we let Colne back into the game in the second half. It took two great saves from our goalkeeper Leigh Walker to keep us in the game. Then with only 6 minutes of normal time left Colne's Ted Cockett beat Walker on the rebound from a further save. The final whistle was more than welcome, we were in the draw for the next round with only four more FA Cup matches to win before we get drawn against the likes of nearby Chesterfield!

There were a number of reasons why we did not live up to our early promise. Paul Smith (Smudge) was missing and we missed his passes and runs forward from the left-back position. Matt Roney who has been our super-sub had earned a start, but he ran out of steam. Then we need Vill Powell back from inquiry in his striker's role.

We have now drawn Bacup Borough at home in the next round. They also play in the North West Counties League alongside Colne and AFC Fylde. But they were giant-killers on Saturday, dispatching Cammell Laird who play two leagues above them. In a dramatic fashion they won 3-0, scoring all their goals in the first three minutes.

We will have to ensure that we aren't caught napping next time at the start of the game.
Posted by Harry Barnes at 4:09 PM