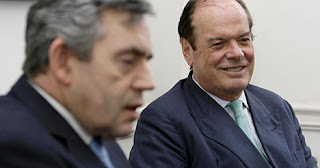 
The Observer reports that a government-commissioned review of civil and military relations which was led by Quentin Davies (the former Conservative MP who defected to Labour last year) has expressed alarm at the number of school children who have no idea about military life. He is said to want secondary school pupils to receive basic military training as a means of developing greater affection for the armed forces. A key element of current cadet's training is the mastering of shooting and the undertaking of military drill. Davies is said to believe that the virtues of discipline, physical exercise and team spirit outweigh any concerns we might have about children using firearms.

The impression is given that Gordon Brown supports this typical right-wing Tory non-sense. However, Des Browne the Minister of Defence (who for some inexplicable reason appointed Quentin Davies to undertake the review) has merely used diplomatic language to state that whilst he can not comment on Gordon's position, the Government "are waiting to see the recommendations with interest".

It would be good to see Gordon booting out the above proposal, by pointing out that a good way to ensure that schoolchildren will not involve themselves in anti-social behaviour is to provide them with an education system which extends their horizons and encourages them to think about, question, investigate and discuss the mysteries and excitements of life.

If Gordon kicks Quentin's views into touch, will the ex-Tory then desert us? I can only hope that both Gordon and Quentin act in these ways. If Gordon backs Quentin, then where do Labour Party socialists defect to? The problem for us is that in British circumstances, we only really have the Labour Party or nothing. Unfortunately, the latter is increasingly becoming attractive.
Posted by Harry Barnes at 8:35 PM