A Must For Any Socialist 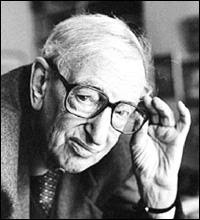 Dan Glazebrook has undertaken this first class interview with Eric Hobsbawn (see left). At the age of 92, Eric provides socialists with as much to think about as ever. Below is the final question and answer. The interview is not to be missed. It appears in today's "Morning Star" on the Arts page!

Dan: How do you view the prospects for the revival of socialist movements in the 21st century and what do you see as the conditions for such a revival, both in the West and in the Third World?

"Eric: I don't see much prospect of a revival of the classical socialist and communist movements of the 20th century.

In the West, their basic constituency, the industrial working class, which they saw as the main agent of social change, could no longer play this role even if labour movements wanted to.

"Their basic form of political action and mobilisation, the mass-membership party of the social-democratic type and the vanguard party of the Leninist type, have not survived the old century.

"What survives of such movements in the West must work as part of new, wider political and social movements and find new forms of action, notably transnational ones.

"Some such movements are coming into being, generally as a succession of ad hoc campaigns, but, as yet, they show no signs of being capable of changing society.

"At the same time, the idea of socialism as a 100 per cent publicly planned collective economy has not survived the end of 'really existing socialism' and will not return.

"Twenty-first-century socialism will be an economy combining the public and private, non-market and market elements, but one whose object is not maximising economic growth and profit but the survival of the planet and the reconstruction of a human society battered and increasingly disintegrating under the impact of the past half-century of capitalist development. How this is to be achieved is the big question for this century's socialists."