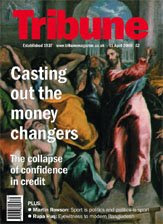 I was one of those people Robert Pandy describes (Tribune 4 April) who heckled Peter Hain at the Tribune Rally which was held during Labour's 1977 Conference. Peter had just defected from the Liberals and I felt that he first needed to earn left-Labour credentials before being invited to address us.

If my memory is correct, Neil Kinnock had an article in a subsequent issue of Tribune which criticised those of us who booed. I responded with a letter which defended the rights of the "little man" to heckle. (What would now be considered to be the use of a male chauvinist term, tended in those days to be seen as a generic term which covered women as well as men. I would be careful nowadays to talk about the "little person".)

When Peter first appeared for Business Questions as the new Leader of the House in the Commons on 19 June 2003, I added the following introduction to the question I asked him on a local Constituency matter - "May I welcome the new Leader of the House to his post? I have obviously changed my opinion since I heckled him at a Tribune Rally just after he had moved over from the Liberal Party."

Peter started his response by saying - "First I thank my hon. Friend for his historical reference. It was 26 years ago, if I am right, in September 1977 and, as I recall, it was a very friendly heckle."

He was only a month out, but the heckling was far from gentle. I then came to have a great deal of sympathy for what at one time were Peter's regularly expressed libertarian socialist views. I even ran a one-person campaign on my blog recently to try and get him to stand for the leadership and not just the deputy leadership of the Labour Party, as a feasible left-wing standard bearer. Such an approach is seen in the views he expressed in his latest Tribune article about Zimbabwe. Let us hope that he once more starts to apply these values to the internal British political scene, otherwise I will have to go back to heckling.