Has The UN Violated The Iraqi Constitution ? 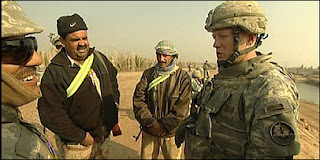 The news item which appears at the end of this post can also be followed on video here. It is from the Real News Network in the USA and appeared on 22 November, 2007. It claims that unless the Iraqi Parliament endorses a United Nations' renewal of the right for Multi-national forces to remain in Iraq in 2008, then under the Iraqi Constitution any such provision would be null and void. The UN Security Council went on to extend the mandate of the Multi-national force on 18 December, 2007 at the request of the Iraqi Government, but not of its Parliament.

I am unable to discover any news item which says that the Iraqi Parliament has ever accepted or requested such a move. (In fact a majority of the Iraqi Parliament wrote to the United Nations insisting that its Constitutional role should be upheld). If anyone else has seen a reference which I have missed, I would be grateful if they would supply me with the necessary link.

I am grateful for Rwendland for bringing this matter to my attention via my comment box on this thread. His comments led me to check the issue with Brendan O'Leary who had helped with the drafting of the Iraqi Constitution. Brendan himself checked the matter out with a fellow constitutional expert and they are of the opinion that under the Iraqi Constitution, their Parliament is required to decide upon the matter.

ZAA NKWETA, PRESENTER/PRODUCER: On May 24, 2007, President Bush had this to say on Iraq:

GEORGE W. BUSH, U.S. PRESIDENT: We are there at the invitation of the Iraqi government. This is a sovereign nation. Twelve million people went to the polls to approve a constitution. It's their government's choice. If they were to say leave, we would leave.

NKWETA: A month earlier in a letter to the U.N. Security Council a majority of Iraq's democratically elected parliament had publicly called for a timetable for foreign troop withdrawal. Prime Minister Maliki silenced Parliament by denying them their constitutional right to ratify the U.N. agreement under which the multinational forces operate in Iraq. This contradicts Article 58, Section 4 of Iraq's constitution, which states that the cabinet must gain ratification from Parliament for all international treaties and agreements. Maliki has repeatedly ignored this rule by acting unilaterally to allow multinational forces to operate in Iraq. We spoke with the Iraq consultant for the American Friend Services Committee, Raed Jarrar.

NKWETA: Pressure is mounting from Maliki to follow the constitution and have the U.N. multinational forces mandate ratified by Iraq's parliament. We spoke with James Paul from the International Policy Forum, which monitors U.N. agreements.

JAMES PAUL, INTERNATIONAL POLICY FORUM: Prime Minister al-Maliki is caught here between a rock and a hard place, because the United States is putting very heavy pressure on him to agree to a simple renewal of this mandate, and the parliament is saying no, we want to have a say in this, and we want certain conditions imposed on any renewal if there's to be one at all, and those conditions would be setting a timetable for the withdrawal of the MNF [multinational forces]. And the United States doesn't want that to happen, so they're ready to ignore democracy in Iraq and put every possible pressure to bear on the prime minister to go along with what they want. I think the issue of what might happen if it were to run out or not be renewed is very interesting here, because clearly the Bush administration, if it's not renewed, is not simply going to pull out all the U.S. forces, but the U.K. might be forced to withdraw its forces in the absence of a U.N. mandate. I think that's quite likely.

Hi Harry, thanks for this. On another thread I mentioned that Raed Jarrar had a similar take on this and you said you were hoping to meet with some Iraqi trade unionists and would try to raise issues such as these with them. Has that happened yet? Anything you can report?

Pete: I was at the meeting with Iraqi Trade Unionists last week. I'm afraid the issue was sidelined as they were pressing their own legal concerns, which I was also keen to pursue. Saddam Hussein's ban on Trade Unions in the major public sector is still in operation. A Directive is in force which has taken our over Trade Union funds and property holdings and an extra Directive has been placed banning Port Workers activities following a strike. And whilst favourable noises were made by the earlier transitional government towards the then major Iraqi Trade Union Federation, its assimilation into a wider Worker's Federation is being used as an excuse not even to give them their past secondary status. (None of these blockages apply in the Federal Unit of Iraqi Kurdistan).
Unfortunately in a general meeting, such matters take time to pursue when they have to be translated back and forth into Arabic. So I wasn't able to raise the mandate issue.
I have, however, emailed the journalist Johann Hari earlier today with a copy of this thread (plus a link to the relevant House of Representatives Foreign Affairs Committee Hearings) - to try and get him to pursue it.
I have found no evidence via the internet that the matter has been before the Iraqi Parliament. But thanks to your reminder, I will now try to see if I can get an MP to make enquiries on this matter via the Commons - to see what, if anything has happened.

Harry, off-topic a bit, but if you have a good question you want put to David Miliband this Saturday, there's a chance to suggest it at:

Rwendland : sorry I missed out, Iran seems to have taken over my life - Part 5 should appear tomorrow.