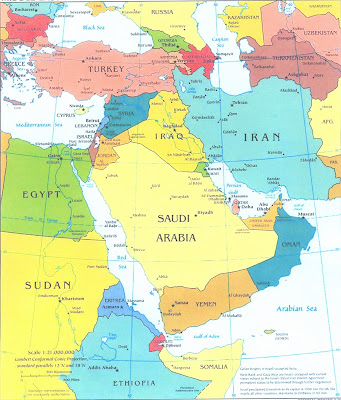 For the source of this map and the larger original version see - here.

NOTE : the reason this series is called "Understanding Iran" is not that I understand it and wish to display my wisdom to others, but the I am writing about it in an effort to understand it myself.

THE IMPACT OF IRAN'S NEIGHBOURHOOD

Iran is wedged between Iraq on its western border and Afghanistan and Pakistan on its eastern border. This is, however, a sizeable wedge as Iran is almost seven times the size of the United Kingdom. But the three neighbours I have mentioned are notoriously problematic nations with highly unstable regimes. Furthermore, the USA and Britain have major troop placements in Iraq and Afghanistan, either side of Iran.

Iran has a hostile relationship with Israel who hold nuclear weapons. Nuclear weapons are also held to its east by Pakistan and India who are in conflict over the status of Kasmir - which is also only some 500 miles away from Iran's border. Iran also has fears that fundamentalist Sunni Islamic elements could come to the fore in Pakistan and would then find themselves in opposition to Shia Islamic elements who dominate in Iran. It must always be remembered that Iran was invaded by Saddam Hussein's Iraq in 1980, when Iraq's power was seen as being held by a Sunni elite. The war against Iraq then lasted for 8 years and led to lost lives as great as those for the whole of the First World War.

Other nuclear weapons in the area are held by Russia, with whom Iran enjoys a more reasonable relationship. On the other hand, there are perceived threats from Britain and (especially) the USA in the region. The latter have bases in eight nearby nations, plus warships in the Gulf near the border of Iran.

An aspect of the divide within Islam between Shia and Sunni is mentioned above. This needs, however, to be seen in the context of there being a total of 57 nations in the world who see themselves as being basically Islamic and who all share membership of the Organisation of the Islamic Conference. These nations cover a wide variety of viewpoints and social structures. Overall, however, Sunni is the dominant Islamic tendency.

Iran and Azerbaijan (on Iran's northern border and to the west of the Caspian Sea) are the two most dominant Shia nations in the world. Some 60% of the Iraqi population (mainly from south to mid-Iraq) also share this position. Whilst the populations of the Lebanon, Yeman and Bahrain have Shia populations ranging from over 40% to over 60%. Although only 20% or so of Pakistan's population are Shia, at around 30 million this makes it the second largest Shia population next only to that of Iran.

In recent periods forms of Shia fundamentalism have come to the fore. First around the revolution in Iran in 1979 which brought Ayatollah Khomeini to power. Then with militant elements amongst the Shia in Iraq following the Coalition's invasion of their country in 2003.

In judging the current degree of Iranian influence in the Shia areas of Iraq, two conficting considerations need to be taken into account. On the one hand, southern Iraq is important to Iranians because it contains many of the shrines of Shia Islam. On the other hand, the Iraqi Shia are Arabs whilst Iran is essentially a non-Arab nation of Persians. For instance, the Iraqi Shia and the Iranian Shia were fairly firmly on different sides during the Iraq-Iran War. Both ethnic and national ties can place limits upon having combined forms of Shia activity between the two nations.

There are 22 nations in the Arab League. All these nations appear on the above map, apart from those in North Africa who are to the east of Egypt and Sudan. They include Saudi Arabia and the nations on its borders. With the exclusion of Isreal. this pattern goes north to Syria. All these Arab nations are also Islamic nations.

There is then, however, a divide within Islam, which cuts across the top part of our map. It is the divide between Arab and non-Arab areas. Turkey, the Kurdish areas within the northern tip of Syria and in the north of Iraq, plus Iran start the divide. Islamic territory which is not Arabic also includes the lands to the north and east of Turkey and Iran, including the section of Russia at the top of the map.

The significance of this division in Islam is that it is only the Arab nations that will find their views expressed via the Arab League or will find influences within their boundaries which seek to press for a form of pan-arabism. Iran is outside of this. This adds to Iran's strong sense of nationalism and independence.

There is a tendency for tribal and extended family links to be a greater force in Arab nations arising from past nomadic traditions. Yet this is not missing on the non-Arab side of the Islamic ethnic divide in the Middle East. It is a strong tradition amongst the Kurds, whilst large extended family groups living a nomadic life-sytle can still be found in areas of Iran.

Some of the nations close to Iran are wealthy, whilst others are impoverished. Qatar and the United Arab Emrates have a Gross Domestic Product (GDP) per head of their populations which is similar to our own. They have used their oil wealth to diversify their economies and to build for the future. Yet countries such as Iraq, Afghanistan, Pakistan and the Palestinian areas are a shattering contrast.

At the time Saddam Hussein came to power as President, the GDP per head in Iraq had reached 45% of the UK equivalent. After the consquences of the Iran-Iraq War, the Gulf-War, UN Sanctions and invasion; the current GDP per head is well below 10% of our own. And this makes no assessment of other problems effecting the quality of life in Iraq.

Iran has a GDP per head which is some 25% of our own. I will spell out more about its internal position in Section 2. But for our analysis at this point, Iran is in something of a mid-financial position. Wealthier nations attract its professional classes. Whilst labourers from poor nations look towards it (as do numbers of other nations) for menial work - except that they are currently detered by Iran's high unemployment and inflation levels.

Oil production can be a mixed blessing. As well as producing wealth, it can attract military and other forms of intervention from other nations. It can also lead nations to concentrate on short-term considerations and to use oil as almost a sole form of revenue for public expenditure.

Iran claims that its nuclear-power programme is part of a policy of economic diversification which takes account of the fact that its oil supplies could be worked out in 75 years.

The nations on the map with substanial oil reserves are the Gulf States, Saudi Arabia, Iraq and Iran. Even if we accept the argument that the Coalition invasion of Iraq in 2003 was partly an attempt to establish a democratic system in Iraq, it needs to be recognised that moves to extend democratic arrangments in Iran in the early 1950s with the nationalisation of the mainly British-owned oil industry and the removal of the Shah, were reversed by a coup to re-establish the rule of the Shah which was aided by the CIA and MI6. The Shah's rule then became increasingly autocratic until his removal in 1979, which then led to the initial establishment of a theocratic regime. We will later examine whether this has changed.

(7) US Troops And Mercenaries

There are US bases in three nations around Iran - Turkey, Afghanistan and Iraq; with a wide use of unregulated security firms operating in the latter.

There are further US bases situated in the Gulf opposite Iran in Kuwait, Bahrain, Qatar and Oman; along with US Naval power in the Gulf itself. The US also operates from Egypt.
Posted by Harry Barnes at 11:50 AM

Email ThisBlogThis!Share to TwitterShare to FacebookShare to Pinterest
Labels: Iran

Harry, this seems an excellent summary - I didn't spot any obvious mistakes in a quick read thru. I have some possible additions.

Perhaps some more on Lebanon, important to the leading Shia nation because the confessional voting system/Taif agreement unfairness. No census for ages but I think the shia:sunni:christian voter split is about 35%:25%:39% but MPs are 27:27:64 + 10 others. So a Shia vote is worth less that a Sunni/Christian vote. Is this a driver for Hammas? How will this tension in Lebanon be resolved? This could easily blow-up.

I gather Israel is being quite friendly to the Kurds, which Iran must perceive as a threat.

If the audience is UK/EU maybe also:

US base on British Diego Garcia. If US were to attack Iran, would UK approval be needed to allow US bombers to bomb Iran? Tricky issue for UK, might put Gordon Brown on the spot if no UNSC vote.

The supply of very quiet German Dolphin class submarines to Israel, and the widely held belief Israel has developed submarine launched nuclear-armed Popeye Turbo cruise missiles. I can see that the west would think giving Israel a reliable second-strike capability could reduce tension for pre-emptive strikes. But it also gives the potential to attack shore locations with very little detection time, which increases military tension from the Iranian POV. But why has an EU country supplied (and cost-subsidised) an advanced nuclear delivery technology into a trouble spot, that would be impossible for Israel to develop itself; especially if it later wants to criticise Iran for developing ballistic missiles?

Thanks Rwendland: there should be another 5 or so parts to my series on Iran. It is filling out a talk I gave to the Derby Fabian Society on Friday. I start in a rather empirical mode and become more political and evaluative as I progress. So I will return to key matters such as (a) nuclear developments and (b) Iranian responses to Palestinian/Israeli/Lebanonese developments. Your comments are, therefore, very helpful for me. I will take my time over it and other issues (serious and trivial) are likely to appear before it is completed.

Depending on what you mean by "Shia dominated" Bahrain and Lebanon(?) and Iraq also have substantial and majority shiite populations though they tend to be "dominated" by a non-Shia ruling class.

Hass: I have attempted to correct my error on the Shia in the section entitled "The Islamic Divide". I should never have made the mistake over Iraq and the Lebanon. Thanks for the corrections.

I learned about this though a friend's blog!

Please feel invited to my blog; I would enjoy discussing Iran with you.

If you permit, I will make a link to this series.

Iam thinking that, i should creat a blog of mine....Placements in USA