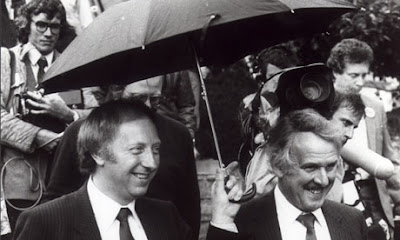 Peter Heathfield died yesterday. Above all he was a kind, open and pleasant person who was always a pleasure to meet. He was also a committed socialist who cared deeply for the well-being of NUM members and of the communities they lived in.

He had studied Industrial Relations, Politics and Economics on a three year day release course for Derbyshire Miners which was run by the Sheffield University Extramural Department. I arrived as a tutor on these courses some years later. But I got to know Peter well in his period as Secretary of the Derbyshire NUM from 1973 to 1984. This arose mainly because he had a deep interest in the nature of our classes and the progress of its members. Along with our children, my wife Ann and I regularly attended the Derbyshire Miners' Weekend School which was held annually at Skegness at Easter. The miner's always asked tough questions and made blunt contributions. Peter was very much at home with the dialectics of debate.

Peter was invariably present at Labour Movement events in North Derbyshire at this time, being a regular and carefully listened to speaker at each Chesterfield May Day Rally. He would have enjoyed the Rally which took place only the day before his death. Amongst the events was a film on the impact of the 84-85 Miners' Strike in North Derbyshire. I only wish that he had been well enough to have participate by being in front of the camera.

Both Peter and his first wife Betty are best known for their roles in the strike. Peter as the General Secretary of the NUM and Betty for the leading work she undertook in the Women's Movement who played a crucial role in supporting the miners. But there was much more to them than the matters which hit the headlines.

Prior to the strike one of Betty's commitments had been with the Woodcraft Folk. My wife Ann attended the groups activities in Chesterfield for a year, before moving on to help in setting up a local group where we live.

Peter was invariably present with the NUM delegation at the numerious Labour Party Conferences which Ann and I attended. He was a regular at Irish Evenings which were run under a flag of convenience by the Workers' Party. He was the only person they ever asked to speak, everyone one else sang songs or played tin whistles.

When he divorced and remarried and moved to North Anston in Yorkshire I visited him in the home he had set up with Sue and then addressed his local Labour Party.

I last saw him just over a year ago at a packed meeting at the NUM headquarters at Barnsley. Arthur Scargill was the main speaker and we were there for the 25th Anniversary of the strike. Peter was in the audience and his health was clearly fading. But it was good to see him again. When it was pointed out to a packed crowd that he was sitting in the audience, his reception matched that of Arthur's.

I first met Peter in the former Derbyshire Miners' Offices in Chesterfield. I last came across him at what had previously been the Yorkshire Miners' Offices at Barnsley. These are places that as a tutor on Miners' Course over a period of two decades, helped to shape much of my life. The debt which I and many others owe to Peter is something we should never forget. To pay that debt we should act on the principles he propounded. It is what he would have wanted.
Posted by Harry Barnes at 7:25 PM

As a striking white collar member of the NUM i saw Peter from a distance but his son, John Heathfield was on strike with me for the year as he worked for the NCB as i did. John was always quietly principled like his dad. Peter, Arthur and Mike made a great trio and were staunch in their support and commitment to the strike. I am so sorry that we have lost a great comrade. Barbara Jackson, Sheffield

Lynchbrian90 : I am both sorry and pleased at the same time that it is the death of Peter Heathfield that has put us in touch with each other. Pleased because you were the person who normally invited Peter to speak at the Irish evening and understand as well as anyone what I was trying to say. I am sorry in that it is the sad loss of Peter that has had to take place for us to be back in communication. When it came to playing the tin whistle, your art will never be forgotten. If I have the title correct, then "Rushing Down" was one of the contributions that Peter and the rest of us found so compelling. I understand that Peter is to have a small family service, having left his remains to medical science. But that eventally there will be a memorial for him in North Derbyshire. It would be good if we could again listen to your tin whistle as a way of remembering him. I am in touch with Derbyshire Miners and will try to let you know what is eventually planned.

Barbara : It is good to hear from you, but I am sorry that it is on such a sad occasion. Those who wish to read more about Barbara's role in the strike, should link to -
http://dronfieldblather.blogspot.com/2009/11/we-are-women-we-are-strong.html

Barbara, we will be meeting again at 8pm tonight, see -
http://dronfieldblather.blogspot.com/

My deepest condolences to his family, friends and comrades!

Harry, I have a nice photo of you and Ann, amongst others, at Peter's tribute at the Chesterfield Miners Club. Is there any way I can get them to you? Sláinte Brian