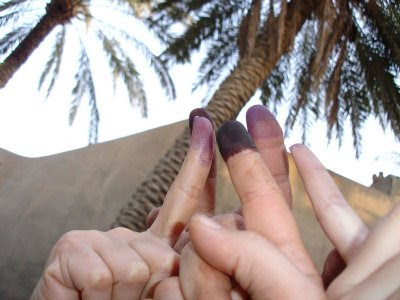 The purple fingers belong to a group who voted in the recent elections in Baghdad. Dr Mohammed a 25 year old dentist tells us that his friends in the photo are Sunnis, Shiites and a Kurd. Dr Mohammed blog is called Last-of-Iraqis and he is my favourite Iraqi Blogger. He is no wild optimist as is shown in the item he posts, but he gives us hope. In part he states -

I woke up with hope, hope for Iraq to be taken along the correct path by its sons. I woke to the noises voters were making in the street. As I dressed I was thinking about how different this election would be. Most of the people I know were not voting based on sects, but on sense. We are sick to death of corruption and sectarianism, and desperate for a change.....With the sparse crowds, I had only a short wait before the employee found my name in the list and gave me my voting paper. I took it to the booth and chose what I believed was best for Baghdad, then I painted my finger purple — it might look ugly, but I like it and I’m proud of it. At the same time, a child reached the table and insisted on painting his finger, too; everybody smiled because he was so happy about it.....On my way home I developed an obsession of looking at the fingertips of every man and woman I passed. Too many had no ink. I hope the electoral committee does its part better than we did. I hope the election will not be fraudulent and the winners will not let us down. And I hope the people who didn’t vote this time will do so next time, and a real democracy will be achieved in the land where the first laws of the human race were set.

Better still go to his blog here.
Posted by Harry Barnes at 11:15 PM