In Memory Of My Mother 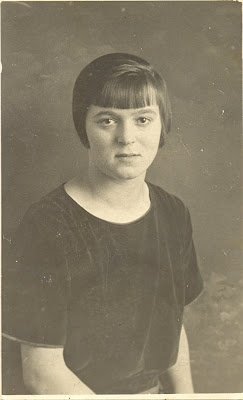 Today is the 100th anniversary of my mother's birth. She died in 1999 and was buried on my 63rd birthday.

She was born at Sunniside in an area that was then the South West Durham Coalfield. She was christened Betsy Gray, although she became known as Betty.

Her parents John and Elizabeth (Lizzy) Gray moved to Sunniside on their marriage in 1898, with John working at the local pit throughout their married life. My grandparents had eight children, two of whom died as youngsters. John Gray himself died in 1920 when he was only 49. The harsh conditions of that time are shown here.

The six surviving children were obliged to leave school at 14. although my mother was always top girl of her class which is shown here. The two boys found work in the local pit, whilst three of the four girls went into domestic service. Only the youngest child, Alice was kept at home because of the poor state of her health.

My mother went into domestic service at Oldham alongside her elder sister Bella. The above photo was taken the month after the 1926 General Strike when she was 17 and she was still working at Oldham. She later worked in domestic service in other places such as Whitby (her favourite) and Seaton Carew.

When her mother moved the family home to one of the new Council Houses at Easington Colliery, my mother temporarily packed up work when she received a description of the Council House which had been acquired. The house had gardens around three sides, a proper bath, a flush toilet, plastered walls and even a landing window. It was a complete transformation to the family home back in Sunniside which was a back-to-back terraced house, with a midden across the street. Even the weather was milder, as Sunniside is exposed at the highest point in County Durham and Easington is next to the sea.

My mother was to be based in Easington for the remaining seven decades of her life. In 1933 she married my father, who was a miner at its pit. The 100th anniversary of his birth is something which I will record in just over 3 months time. The photograph below was taken in Sunderland around 1946, when my mother and father would have been 37 or so and I would be about 9 or 10. 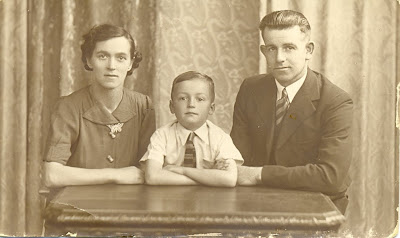 My mother retained the closest of links with her side of the family in particular, which was aided by the fact that during my school days we lived only four doors away from her mother and her unmarried brother, Bill.

With her brothers and sisters she had attended the Sunniside Methodist Sunday School and was married at the Easington Bourne Methodist Chapel, where I was then christened. When she was 40 she once more started to attend Chapel and became fully involved in its activities and in the social life around it. She became Secretary for the Women's Meetings, undertook Overseas Mission work and took a leading role in acting in the plays it produced.

Although she did not find paid work during her married life, apart from her own housework she looked after her mother's home as Granny was always frail. Then she often cared for others, as when my Aunt Alice developed cancer.

She was bright, lively, friendly and popular. She regularly visited the local library and read three modern but serious novels per week, until Alzheimers finally caught up with her in her mid 80s. 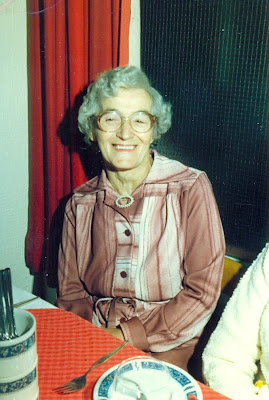 She ended her days in a nursing home, which had been the Colliery Manager's house, being visited by my father for long periods each day. My wife and I told her about my father's death, but it did not register with her until on a later visit she said to us "Joe doesn't come to see me any more." He was the last person she remembered. She couldn't come to terms with the idea that the man in his 60s in front of her could be her only child. She had a long, tough, active and happy life - helping others. Her immediate family being at the top of the long list, which was completed when I married Ann and then her two beloved grandchildren arrived.

The photograph of my mother above was taken when she was in her early 80s, but before the onset of Alzheimers. The photograph below is taken at Christmas 1979, when she and my father were 70. Her grandchildren are Joanne (7) and Stephen (11) 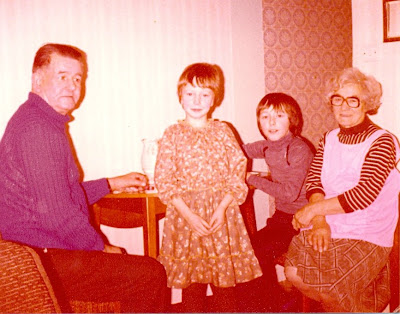 Harry, thanks for sharing your Mother's story and providing a fascinating piece of social history along the way.

As a first time poster I would like to congratulate you on an excellent blog. Keep up the good work!

Jim : Thanks. The best of luck with your full blog when it emerges. I will look out for it.