A Fine Book On Sunniside Reviewed 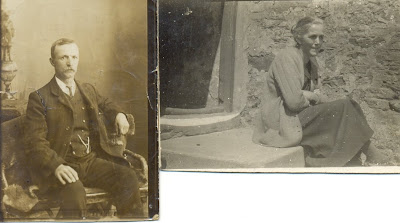 Sunniside is a former coal mining community situated in County Durham. At its peak it had a population of over 1,500. Its main pit was sunk between 1866 and 1868, but numbers of the miners who settled in the village also found work at neighbouring pits in the Crook and Tow Law area.

When the pit was closed in 1925 (with much of the surrounding coalfield also being worked out), many local miners and their families moved to larger and deeper mines near the Durham coast. The pit was, however, re-opened for a period between 1937 and 1965 with coal extraction taking place beneath the local school.

Today Sunniside has no shops and few services and a population of under 500, but it remains a closely knit and friendly community.

I have culled this information from a fine book which is entitled "A History of a Village : Sunniside" edited by Julie Ward. It is published by the Sunniside Community Association at £7.50p (ISBN 978 0 9555487 0 3). Copies covering postage, package and handling can be obtained for £11 via Julie Ward, 43/44 Gladstone Terrace, Sunniside, Bishop Auckland, Co Durham DL13 4LS with cheques made out to the "Sunniside Community Association".

My interest in the book arises from the fact that my mother's parents settled in Sunniside following their marriage in 1898. My Grandfather, John Gray died in 1920 and my Grandmother Lizzy (Elizabeth) joined the exodus to the Durham coastal coalfield area in 1929. She moved the home to Easington Colliery as my two Uncles had found work at its pit.

I have only ever visited Sunniside once. I was a young boy and it was shortly after the end of the second world war. My Uncle Joe was one of the few miners in the area who owned a car at the time and he lived and worked at Easington's neighbouring Colliery of Horden. When he turned up to give my mother and myself a lift to Sunnside, my Aunt Alice and Cousin Robert were with him. My mother Betty was Alice's sister. They were both born in Sunniside.

When my Grandfather died he was 46, leaving my 43 year-old Grandmother with six surviving children. Three of these were still at school - Robert (12), Betty (11) and Alice (10). The only finances available came from the wages of Bill (18) who worked at the pit and whatever was available from Annie (20) and Bella (15). But the girls worked as domestic servants probably in Whitby (this is a correction added 6 September) and Oldham and would receive little in wages beyond their accommodation and meals.

The harshness of the conditions at that time is shown in the book. Julie points out that annual "epidemics of measles, mumps, diphtheria, scarlet fever, chickenpox and influenza were common well into the 20th century" (page 11).

In addition to general poverty, there were two particular factors which would aid the spread of disease.

First, there was the use of middens as toilet facilities. To use a midden residents had at the minimum to cross a road. As areas of houses were built back to back, those living on the far sides from the middens had to embarked upon a walk round the end of their street. The only way in which the contents of the midden was controlled was by adding the ashes deposited by the coal fires. The middens were emptied by "midden men" with the contents being shovelled out onto a horse-drawn cart and transported to the "shit tip" (Page 37). The only time in my life I have used a midden was on my trip to Sunniside. It is my main memory of the visit.

A second hazard is that the winters in Sunniside were the complete opposite of what its name indicates. My mother told me of how they were cut off from the outside world in winter snow drifts. These occurred because Sunniside is the highest village in County Durham and is situated on a ridge. The stories my mother told are fully confirmed between pages 58 and 61 of the book in a section researched from the school log book and the Northern Echo. These are illustrated with dramatic photographs.

I know that Lizzy and John's first child Louisa was born in the winter conditions of January 1899 and the child died 15 months later. My mother also spoke of a teacher making a comment which hurt her mother when a second child had died. The teacher had said that at least the loss would not be as bad for Lizzy as she had a large family. I hold a copy of a small "summary" birth certificate which indicates that this child was Henry Gray born on 3 July, 1913.

The combination of having to try to use middens in the depth of winter would add to health hazards, as would "slopping out" at any time of the year.

Lizzy's surviving children had no option but to leave school as early as they could in order to find work. My mother was always top girl in her class (but was never able to surpass the top boy). She would have loved to go on to have become a teacher, but she was obliged to join Bella in what they called "place" when she was 14. All but one of the siblings started work at that age. The boys at the pit and the girls in domestic service. Only the youngest, Alice stayed at home when she reached the school leaving age due to her bad health.

Julie provides evidence to show that the Gray's eventual move of the family home to Easington was a common feature of its time. She provides a relevant quote from the school log for 21 September, 1928. It stated that the "number of children on the registers is very unsettled - families moving to Easington, Sherburn and to other places where work is more plentiful" (page 15).

Yet Sunniside for all its hardships built a close and mutually supportive community. The Grays reflected this social bond and when the children set up families of their own, they would meet up regularly even when three out of the six offspring moved distances away from Lizzy's home.

On the day I visited Sunniside 60 or more years ago, I don't know who we visited. Both Lizzy (nee Lauder) and John Gray had come from large mining families in the area. Some of these I later visited at Crook, Tow Law and Shildon.

Julie's book is a must for anyone who knows Sunniside, even someone with my limited experiences. Yet it should also be of interest to anyone with a concern for social history, including researchers. Its strengths seem to me to be (1) the work done on school log books from 1878 to the local school's closure in 1960, (2) the description of an area of Sunniside drawn from the 1881 census and (3) the use made of Kelly's Directories in describing services in the Village up to the final village shop closing in 1996 and the Post Office (by then limited to postal services) departing in 2002.

There are two fine pieces from the past by John Armstrong who was born on 12 June, 1910 (only 16 months after my mother). His piece about his father is particularly telling. His father showed a selfless care for others and this led to his death when only 27.

It must, however, be two school matters on which I close, especially given there significance for the Gray family.

First, for 14 September 1920 in the school log we have - "No exercise books, pens and ink have been received over 13 months, and at the time of inspection the ink had been watered to make it last out, pens couldn't be changed and every available space in arithmetic exercise books was written on. Consequently everything was much below the normal quality of work. The paper of some books supplied is so thin that the ink runs through the other side". At this time my Uncle Robert, my Aunt Alice and my mother were studying under these conditions, as was the above John Armstrong. It was the year in which my Grandfather died.

Secondly, Julie adds that difficulties "caused by the protracted miner's strike in 1921 prompted the school to be in a mass feeding programme in April with breakfast and dinner being served in the school for 'necessitous children'. By June the canteen committee was also providing soup on a daily basis for adults" (page 15). The Gray's would need to draw fully on such essentials. It was the year my Uncle Robert was 14 and would be obliged (when he could) to start work at the pit. Yet this fine school photo also seems to have been taken later in the same year.

Further tough times lay ahead with the closure of the local pit in 1925 and the lengthy mining strike of 1926. Yet the Gray's always looked back on their time in Sunniside with great affection.
Posted by Harry Barnes at 1:38 PM