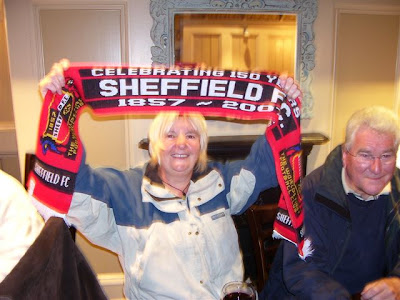 Tuesday evening's FA Cup Preliminary Round Replay between Sheffield FC and AFC Flyde was so enjoyable that Janet, Dave, Martin and myself resolved to make the trip to Loughborough Dynamo's ground yesterday to see our away game. Unfortunately, the game was postponed at the last minute due to a waterlogged pitch. But we had had the foresight to anticipate this and called off our trip 3 hours earlier.

Apart from goals, there was a shortage of supplies for the Tuesday evening game. Janet bought the club scarf which she displays in the above photo, but when Dave decided to buy the only other scarf in the Club Shop they had sold out. Then Martin went to buy a pie just as the game got going and they had none ! I mean what is a football match without scarves and pies? Luckily this one was quite something.

The replay resulted from a 1-1 draw at AFC Fylde just three days earlier and Sheffield FC's administration had been caught on the hop. Luckily, the same had not happened to the team.

Apart from even exchanges at the onset, Sheffield FC dominated proceedings and ran out 4-0 victors over last season's FA Vase winners.

First, Mick Goddard scored his first goal since his move to Sheffield FC following a fine cross from Smudge (Paul Smith) plus a fine header by Asa Ingall. The second goal came from that-man-again Smudge as he headed home a Gavin Smith free-kick.

Unlike the Sheffield FC administration, our group made its own forward planning and Mark made it to the Coach and Horses bar to line up our half-time drinks.

The football, therefore, looked even better in the second-half. Although Scott Partridge had a perfectly good goal disallowed, he went on to split the AFC Fylde defence in the 61st Minute and Daz Winter smashed the ball into the back of the net. Mick Goddard rounded off the festivities when he converted a penalty in the 86th Minute.

For the second time this season we had run riot in front of a crowd of 285. The previous time being at our 5-2 win at Gresley. In future we will have to close the gates when the magic number is reached.

We stayed to clap the team off the pitch, not least because we knew that the half-time crush at the bar is seldom repeated at full-time. The lads behind the goal had chanted "We're going to wemb-ber-ley". That is the beauty of the FA Cup, we only have to triumph in 12 more rounds for that to come true. And only 5 victories will put in the hat with Football League teams.

It was celebration time, which was completed by the fact that Martin our computer expert had discovered that Smudge originates from Easington Colliery - as I do. When I then discussed this with our man of the match, I discovered he had lived only seven doors away from my parents and from my own earlier home. Furthermore (unlike myself) he had played for my old school's team.

It is now roll on Tuesday evening for the next game against Shepshed Dynamo. There is only one problem. All our games against teams with "Dynamo" in their title have (like yesterday) been postponed due to a waterlogged pitch. Still the Coach and Horses will be open!
Posted by Harry Barnes at 11:02 AM