The Birth Of Easington Colliery. 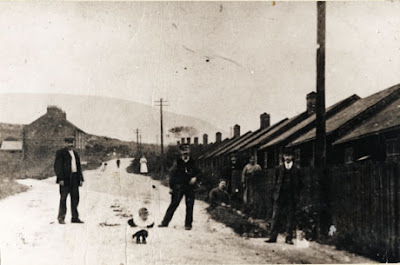 This photo was taken at Easington Colliery around 1902, some three years after the start of the sinking of the pit. The single storey huts in a terrace on the right were known as "Sinkers' Hut" and were for the families of those working on the sinking of the pit. There were 36 huts in all, in two rows. In numbers of cases these were also occupied by lodgers, who also worked as sinkers. The dirt track which a number of people are standing on is Seaside Lane. It ran for a mile and a quarter inland to an ancient settlement which became known as Easington Village and whose detailed history (in contrast to the Colliery area) goes back to Anglo - Saxon times. The handful of terraced houses on the left are probably the start of a large estate of similar permanent houses for miners. The huts on the right were later replaced by similar housing. Some 700 yards to the back of the photographer are cliffs leading down to the beach and the sea. The pit seams would eventually operate both under the bed of the North Sea and inland.

Under the title "The Birth Of Easington Colliery", a 6,000 word article of mine has recently been published in the Journal of the North East Labour History Society,Volume 42 (2011). The article covers the period from 1899 when efforts were first made to sink the pit, until 1911 when the local Miners' Lodge was finally established. In that time, the population around the immediate mining area grew from less than 50 people to almost 800. However, the bulk of the newcomers arrived only from 1909, when technical problems in the sinking the pit had been overcome. The first coal was drawn in 1910.

1899-1911 was very much a pioneering period for Easington Colliery. In the following 20 years its territory expanded and its population peaked at around 10,000.

I am now researching a follow-up article for the period 1912-26, which contains a series of dramatic events within a period of rapid growth. These include the Minimum Wage Strike of 1912, unofficial strikes, the impact of the First World War, the 1918-19 Influenza Epidemic, a start of Labour Politics via a local Branch of the Independent Labour Party, a significant Methodist leadership of the Lodge, Jack Lawson being the unsuccessful Labour Candidate in 1918, the impact of the Sankey Commission's Report, the 1921 Lock Out, Sidney Webb as the successful Labour Candidate from 1922, whilst Beatrice Webb organised the local Women's Section, ending with the General Strike and Lock-Out of 1926. It was also in 1912 that my paternal Grandparents and their established family of seven children settled firmly at Easington and were solidly part of the period I am now researching.
Posted by Harry Barnes at 4:49 PM

Hi Harry - I have enjoyed reading your work on Easington and am trying to access your article in the North East Labour History Journal; unfortunately I can't seem to get to it via any libraries here in Australia. My PhD is about migration from the NE to Australia and most of the people I am interviewing come from around Easington, so I would love to read more of your work. Do you have any way I could access the article? Any help would be greatly appreciated! My nan also lived in the B streets in Easington and despite moving to Birmingham in the 1930s and Australia in the 1970s she still called it home. Looking forward to reading more. Kind regards, Annmarie

Sorry "ProjectNE", I have just seen your comment, although it is now six months old. Here you will find the web-site of the NE Labour History Society, perhaps they can help you -
www.nelh.net
They only have an annual publication of their Journal. My article in 2011 covered the years 1899 to 1911. My 2012 article covered 1911 to 1919. I doubt if there was much or any migration from Easington Colliery to Australia in that period. I certainly don't cover the matter in my articles. I am now working on a third article for the 2013 edition which aims to cover from 1919 to 1935. Perhaps industrial strife in 1920, 1921 and 1926 (plus the related inter-war depression) aided migration. If I came across this, I will post an item about it on this blog sometime.