Iraq : Who Is The Winner? 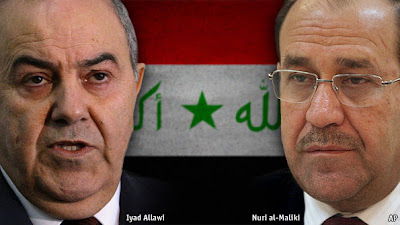 Let us assume that (a) Maliki's attempt to seek a manual recount of the votes in Iraq fails and (b) the projected results show the result as it will be finally determined. Will Allawi or Maliki then be in the best position to form a Government?

As Allawi has gained two more seats than Maliki, he is given the first official shot at cobbling a majority together. But he has a hard task to do this. For Maliki would seem to have 49.5% of the seats within his control even before the manovering starts. These are made up of his own groups 89 seats, the 70 seats which went to the Islamist National Iraqi Alliance and the 2 seats of the Islamic Group of Kurdistan who are also Islamist. That would leave him only 2 seats short of a minimal overall majority.

To triumph, Allawi needs the following support to add to that of 91 seats he holds. 43 Kurdish Alliance, 8 Movement for Change (a newly emerged Kurdish group who are an opposition to the Kurdish Alliance), 6 Iraqi Accord Front (Sunni), 4 Unity Alliance of Iraq (Secular), 4 Kurdistan Islamic Union (who at least work closely with the Kurdish Alliance) and 8 from the seats provided for Minority Groups (five of whom are Christians).

There are, of course, other possibilities. Either Maliki or Allawi or both of them could drop out of the race to let someone else in to form a Government; or they could come together in a coalition holding between them 55.4% of the seats. But which one would hold the top job?

My details are based on this source and its links - as they stand at this moment.

While the Supreme Council and Maliki look to be heading towards an alliance the Sadrists, who got the most seats within the National Alliance are opposed to Maliki. There's also no reason for the Kurdistan Islamic group or the Kurdistan Islamic Union to go with Maliki right now either. They tend to follow the lead of the Kurdish Alliance in national politics. The Kurds seem to be leaning towards Maliki right now because there are a lot of Sunni figures in Allawi's list that they don't like.

Joel Wing : Thank you for your immediate and informative response. I will link to your blog and study it.