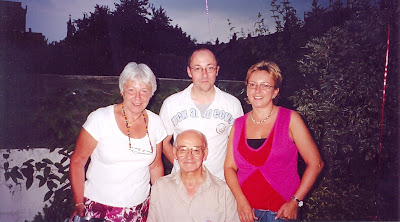 The start of life as a blogger on becoming three score years and ten ; with Ann, Stephen and Joanne.


This blog was set up for me by my son, Stephen. Unknown to me, he undertook a test run for it on 4 May 2006 using the text of a letter of mine which the New Statesman had published. He then added the preface I had written for the TUC publication "Hadi Never Died : Hadi Saleh and the Iraqi Trade Union Movement" by Abdulah Muhsin and Alan Johnson. He placed the blog upon the screen of his own computer for me to see for the first time on my 70th birthday.

This is the third anniversary of the blog being given to me. This is the 479th item to appear.

Halfway through its current life, my daughter Joanne decided that I needed a scanner to improve its presentation. She had to show me how to scan and I first made use of the scanner with this greeting on Christmas Day 2007.

After 3 years I have decided to place the blog on hold for a while so that I can concentrate on some other tasks. I have, therefore, also closed down the comment box for now.

One of my alternative tasks is to concentrate on making contributions to the alternative blog which I am linked to entitled "Dronfield Blather". It is administered by Blogger Brader and is the blog of the Dronfield Labour Party Discussion Group. There is a debate to initiate on the thorny topic of the future of the Labour Party.

I will, of course, be able to make passing comments in other people's comment boxes and can always return to using this blog when confronted with a matter of great importance. But I will attempt to resist the passing temptations of this blog for a while.

I am, of course, old enough the remember Mrs Mopp on Tommy Hanley's 2nd World War wireless programme "ITMA". She always ended her spot with the comment "TTFN" . So it is "ta ta for now".
Posted by Harry Barnes at 3:45 PM

Email ThisBlogThis!Share to TwitterShare to FacebookShare to Pinterest
Labels: Blogs