May Day Greetings From The Iraqi Communist Party 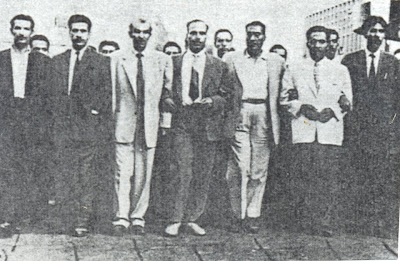 50 YEARS AGO TODAY OVER HALF A MILLION PEOPLE MARCHED IN A MAY DAY DEMONSTRATION IN BAGHDAD WHEN IRAQ HAD A POPULATION OF LESS THAN SEVEN MILLION. THEY WERE LED BY THEIR TRADE UNION LEADERS (above) WHO WERE ALSO MEMBERS OF THE CENTRAL COMMITTEE OF THE IRAQI COMMUNIST PARTY (ICP). THE EXCERPTS BELOW ARE FROM THE EDITORIAL OF "TAREEQ AL-SHAAB" (People's Path),THE CENTRAL ORGAN OF THE ICP AS ISSUED ON 27 APRIL, 2009.


Hundreds of millions of workers and people around the world and also in Iraq will celebrate International Workers Day, the 1st of May, which has been associated with the revolutionary and democratic movement and the struggle to end all forms of exploitation and subjugation by the classes that control wealth and dominate political power and society. It is an occasion to highlight the pioneering role played by the workers, since the dawn of history, as the main force in building human civilization and as the real creators of material wealth.

The 1st of May entered the annals of the history of international class and political struggle after the strike organised by trade unions in Chicago on 1st May 1886, when protesters clashed with the police that were acting on behalf of big business, resulting in large numbers of casualties among the workers, with many arrested and several of them sentenced to death.

Since that day, the 1st of May has become a symbol of the struggle against poverty, hunger, unemployment, social injustice and marginalization in all its forms, and to raise the standard of living, improve working conditions, reduce working hours, regulate wages and enjoy social security.

In Iraq, the workers celebrated this glorious day openly for the first time after the 14th July 1958 Revolution, when the 1st of May was declared a national holiday. Baghdad still remembers, to this day, that million-strong demonstration organised by the Iraqi workers and their trade unions, supported and backed by the Iraqi Communist Party, on the 1st of May 1959. That historic event was echoed in towns and provinces all over Iraq with carnivals and celebrations unparalleled in the history of our country.

Before the 14th July 1958, Iraqi workers used to celebrate this occasion, dear to their hearts, in clandestine conditions, away from the eyes of the secret police of the monarchic regime. Since the formation of the first trade union organisations and the birth of the Iraqi Communist Party in 1934, the emerging Iraqi working class led the struggles of the people and their strikes, economic, social, political and class battles and courageous uprisings. These struggles have become shining landmarks in Iraq's contemporary history and a memory that haunts dictatorial rulers, parasitic elements and the enemies of freedom, democracy and social justice. The role played by the Iraqi Communist Party in those demonstrations and uprisings, by coordinating with the patriotic and democratic forces, was instrumental in deepening the content of those battles and giving them a broad national and democratic character.

Under Saddam's dictatorial regime, the Iraqi working class was subjected to various forms of exploitation, political repression and the falsification of its will. Trade unions and professional associations were turned into "yellow" organizations and empty fronts for the ruling Baath party and its security and intelligence organs. In the aftermath of the war and collapse of the dictatorship on 9th April 2003, despite the extremely difficult and complex conditions that existed under occupation, trade union work and other forms of political and social activity began to emerge and develop. But exceptional circumstances, especially the vicious terrorist campaign waged against our country and the presence of occupation forces, curtailed that promising start and prevented the Iraqi working class and people from reaping its fruits on the level of organisation and in the broad arena of labour. 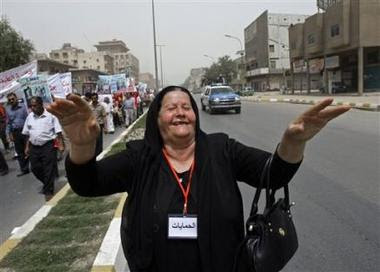 PHOTO OF TODAY'S MAY DAY IN BAGHDAD

In addition, government interference in the affairs of the General Federation of Trade Unions in Iraq, and other associations and unions, played a negative role that hampered its activities in defense of the rights of workers. For example, successive governments have continued to give a deaf ear to persistent workers' demands for abolishing Decree No. 150 (1987) that was issued by the so-called "Revolution Command Council" under Saddam's dictatorship, which turned state sector workers into government employees, prohibiting them from setting up their own trade unions.

Decree No. 45 (2003), issued by Bremer's occupation authority, which suspended the election activities of trade unions and put them under the mercy of a ministerial committee, is still in force. Furthermore, the government is still insisting, till this day, on its unjust Decree No. 8750 (2005) that called for freezing of the movable and immovable assets of the unions, in a blatant manifestation of interference in their affairs that resulted in paralysing unions' work and activities. The position of the government has regrettably remained unchanged in spite of many appeals and several meetings between the representatives of the General Federation of Trade Unions in Iraq and key government officials, and despite the many promises given by these officials to find quick solutions to these outstanding issues.

Iraqi workers and our people in general have been following closely the positive steps witnessed by our country in terms of pursuing the networks of terrorism and acts of sabotage and tightening the noose around criminal elements and outlaws. They are also aware of increased stability, the acceptance of the peaceful political process, and Iraq's expanding regional and international relations. While expressing support for these developments, they also look forward to practical, quick solutions to the problems of unemployment, high prices, health and education, providing protection for national products, restoring the status of industry and agriculture in Iraq, finding solutions to the crisis of housing, transport, water and electricity, developing social welfare programs and the laws of retirement and health insurance, and addressing the disparity between the salaries of senior officials and those of government employees.

In addition, millions of workers are looking forward to bold steps to be taken by the government in order to strike with an iron fist at the corrupt, big and small, who are stealing people's food and wealth, and who are hostile to the aspirations of the poor, the widows and orphans, and the families of martyrs and the "disappeared".

Today, as the spectre of unemployment creeps and the gains made by broad strata of the population in advanced capitalist societies are eroded because of the nature of the capitalist system and its mechanisms, and as a result of the new global financial and economic crisis, the struggle of workers' unions and professional associations in the developed capitalist countries is intensifying. This struggle enjoys broad support and active participation of all the forces that are opposed to savage capitalist globalization and are calling for a truly humanitarian globalization. There is an escalation of struggles to preserve the gains that the workers, those with low income and wage-earners in general, had achieved through struggles for more than a century, particularly the gains made in the areas of reducing working hours, increasing wages, obtaining health and social security and to strive to enrich these achievements in line with the development of society and the requirements of modern life. We have great confidence that the workers and toilers of our country, Iraq, will spare no effort to contribute to these struggles, for a better future for themselves and for all mankind.

THIS PROVIDES A LINK TO MY OWN 4 PART HISTORY OF THE IRAQI COMMUNIST PARTY.

UPDATE 2 MAY : FOR A REPORT OF THE ICP AT YESTERDAY'S MAY DAY IN BAGHDAD INCLUDING 9 PHOTOS, SEE HERE.
Posted by Harry Barnes at 3:35 PM

Renegade Eye : Mayday Greetings. I will try to make the Chesterfield Rally on Monday.