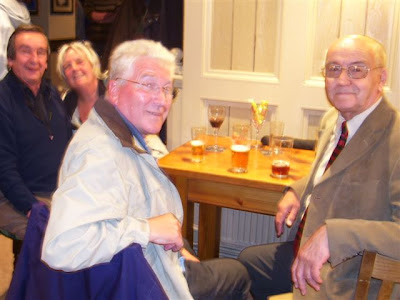 The match we had just seen was both entertaining and disappointing. After our 5-2 away win at Gresley, we had hoped for a continuation of the fun. But Carlton were fully in command for the first half-hour. We then broke away and new signing Scott Partridge made a defence splitting pass for Vill Powell to run on to and put us 1-0 ahead.

The game was then turned on its head for the next half hour with Sheffield FC in command. We then had a mirror image of the earlier change in fortunes and Carlton not only equalised but took over once more, taking the lead a few minutes later.

It was only in the later stages that Sheffield FC rallied, but the game now went too and fro and anything could have happened. Luckily for us it was Paul Smith (Smudge) who helped save the day.

In the second half he took three free kicks between 25 to 30 yards away from the Carlton goal. His initial shot early in the second half rattled the bar. His next effort went just over the bar. When he took the third free kick after 87 minutes, the Carlton goalkeeper knew what to expect. So instead, Smudge hit a low shot which bounced back off the startled goalkeeper and Scott Partridge returned the ball back into the net.

With four minutes of added time, a great chance fell to Sheffield's substitute Mick Goddard who ballooned the ball over the bar when it was crossed to him in the six yard box.

But I was happy to settle for a 2-2 draw. For over the 90 Minutes Carlton were the better team. Unfortunately, Vill Powell our striker collided with the Carlton goalkeeper late in the second half and had to be carried off the pitch, with an ambulance then arriving to take him to hospital.

On the positive side, 480 turned up to watch the game. It was the highest attendance of the 20 games played in our League this season - one at each of the League's grounds. The second highest crowd was at our away match at Gresley on Saturday. That crowd was nearly 200 fewer than last night.

Sheffield FC will need to step up a gear from last night's performance to hold onto such crowds and challenge for promotion. If they fail, however, then as you can see from the above photo we know how to drown our sorrows - it could be the same when it comes to politics.
Posted by Harry Barnes at 1:51 PM