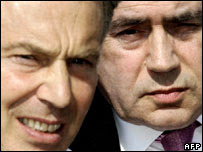 Tony and Gordon In The Eyes of Capitalism.
Alan Greenspan was the head of the Federal Reserve in America from 1987 to 2006. He was the crown prince of world capitalism. He has written a book entitled "The Age of Turbulence: Adventures in a New World" (Allen Lane 2008).

Below I give an extract from a review of his book by Prem Sikka which appeared in Tribune. His quote from Greenspan's book confirms what democratic socialists knew all along.

"Greenspan was a key player in the expansion of Reaganomics and the rolling back of the state...He praises Thatcherite economic policies and offers his evaluation of former Prime Minister Tony Blair and present Prime Minister Gordon Brown. Referring to a meeting in 1994 he says: "It appeared to me that Brown was the senior person. Blair stayed in the background while Brown did most of the talking about New Labour. Gone were the socialist tenets of postwar Labour leaders...Brown espoused globalisation and free markets and did not seem to be interested in reversing much of what Thatcher had changed in Britain. The fact that he and Blair had arrived at the doorstep of a renowned defender of capitalism (namely, me) solidified my impression"
Posted by Harry Barnes at 5:55 PM

Just like an American talking from America he would not fly in case a dark skinned person jumped up and said Allah, it might have been Allan but you know the Americans.

Brown, as Chancellor and as a well-read academic, would lead on the economy.

The obvious point is that if you adopt a right-wing model of political economy, you will end up as a right-wing government.

They had a healthy economy and a huge majority - what a wasted opportunity ...

you're right, about the economy, etc but surely as the pursuit of power was THE New Labour policy, then everything tended to fall in line behind that, rather than do anything radical that could risk losing power, they took the line of least resistence and went along with watered down Tory tinted policies?

The point I would always make Modernity is that Labour turned to the right after power was gained and have deluded themselves about the popularity of the move.

Crucially, I (and probably a fair section of the electorate)certainly didn't want them to do anything 'radical', I just want them to be Labour and stop the damage being done by Thatcherite policies. Instead, they intensified it - and there was nothing 'watered down' about their policies at all.