A Thought On May Day 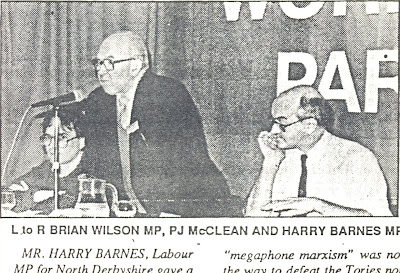 Given his interest in the Workers' Party of Ireland, this is mainly for Johnny Guitar. It is from the Northern People of 3/2/1989. Sorry it is cut short. In full it said -

"Mr. Harry Barnes, Labour MP for North Derbyshire gave a full and frank analysis of "Thatcherism" and how it could be combated. Mr. Barnes received resounding applause when he said that "megaphone marxism" was not the way to defeat the Tories nor could it build a conscious working class. Dealing with the everday needs of the people was, he said what the Labour Party were about"

Mind this was said well before the days of Blair and Brown. Of course, I am no longer an MP and it used to be North EAST Derbyshire I represented. This was on my first visit ever to the Island of Ireland. I was then fully involved with its politics for the next 16 years before I retired. Iraq now seems to have taken its place in my priorities.
Posted by Harry Barnes at 12:40 AM

An interesting little snippet Harry and something of a coincidence that you bring up the subject of the Workers Party - their Ard Fheis/annual conference is being held next weekend. The WP has been trying to initiate something of a rebuilding process in recent months. They launched a newspaper last year called Look Left and they seem to have a more active membership now than at any time since the big split of 1992. With the exception of the (Irish) Labour Party, they have been the only party in this neck of the woods to offer a rational left analysis of the situation here since the restoration of power sharing (see their response to the Programme for Government and investment strategy). A comeback from the party is extremely unlikely, but I suppose if Cardiff City can make it to the FA Cup final then anything is possible!

Johnny Guitar: in the first paragraph of your own contribution to your post "Where To Now?" you give the reason why someone from Derbyshire should be interested in the fate of the Workers Party.