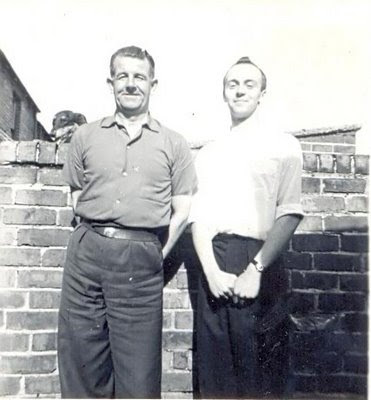 The photo shows my Dad and myself, with next door's dog looking over the wall. It was taken around 1959 in the backyard of our home at a colliery house in Baldwin Street - although in the period of the 1926 General Strike and the Miners' Lock-Out, Stanley Baldwin the Prime Minister was only popular amongst the coal owners and not the miners. My father was brought to Easington when he was two and lived there until he died 84 years later. My mother lived there for 70 years, from the age of 20 until her death in the Nursing Home which had been built as a home for the local pit Manager. For my tributes to my mother and father click here and here.
Posted by Harry Barnes at 12:43 PM