Needed - A Vote Of No Confidence 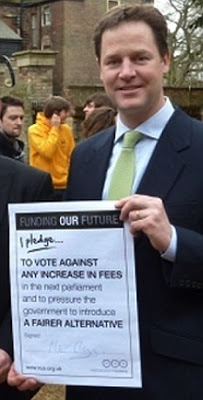 Nick Clegg has booted the Doctrine of the Mandate into touch by making the strongest possible commitment at the General Election to vote against increases in student fees (see photo), then advocating the exact opposite as Deputy Prime Minister.

Vince Cable (below) as Business Secretary is the responsible Government Minister on the issue. Whichever way he votes on the matter in the Commons his changing speculations as to what he will do has driven a coach and horses through the notions of Ministerial Responsibility and Cabinet Collective Responsibility. He has changed his mind as often as he has shifted his views on what type of economic policy we should pursue. 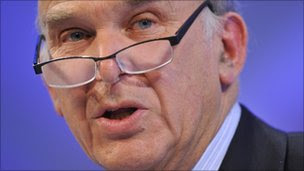 There is now a great opportunity for Labour to undermine the position of the Lib-Dems on Student Fees by calling for a Vote Of No Confidence on the issue.
Posted by Harry Barnes at 11:44 AM