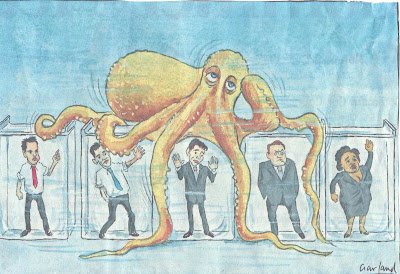 In batches between 20 and 28 June I emailed 141 of my former Labour parliamentary colleagues seeking support for them to back a call to the Labour Leadership Candidates to issue what some of us have called "Manifestos of Intent". Our proposal is explained here.

These various efforts have so far received only two responses, both of them positive. One from John McDonnell giving his support and the other from Andy Burnham accepting our proposal.

The two Eds, whom I have never met push the unanswered emails back up to 141. So I wrote a letter to the Guardian about the problem. This was published on 6 July and is given below.

To date, my letter to the Guardian has stimulated a response from only one Labour MP although the person concerned fell outside the category of my above efforts.

I appreciate that there is nothing as ex as an ex-MP, but I had hoped that one or two of the remaining Labour MPs who were around before 2005 would seek to humour me. I now know that the "ex" stands for ex-communication. Although one "out of office" reply did inform me (and thus constituents getting the same reply) that if I did not get a reply after 28 days that I should send another email. So I could get some responses after the leadership contest is over.

If there is anyone out there that is not past their sell by date and has influence with a Labour MP (including the candidates for the leadership), then perhaps they could push our case with them.

Here is the Guardian Letter, under "Question for Labour hustings".

"Polly Toynbee is spot on when she says that the Labour hustings take the oxygen out of the leadership debate (Labour's hustings are dismal, 3 July). It isn't, however, just the nature of the spoken word which has trivialised the contest. What about the written word? Candidates' leaflets, press interviews, circulated emails and blogs are all used to produce the equivalent of soundbites. It is hoped that we will read into them much more than they say.

What is needed instead are the production of serious and detailed think pieces by each of the candidates in the form of personal manifestos, showing where and how they hope to lead the party. On behalf of 50 rank-and-file Labour members from 15 different constituencies*, I have asked the candidates to issue such manifestos. So far Andy Burnham has agreed, while the proposal has received the backing of John McDonnell, who failed to qualify for the present travelling circus.

I hope that the other leadership candidates will respond favourably. In batches I have also emailed another 139 Labour MPs who used to be my colleagues when I was an MP. They may need to check their spam boxes. For my self-esteem, it would be nice if I received more than the two replies which have arrived to date!

* = I miscounted, the number of CLPs was 20. We currently have 2 extra, plus the Socialist Health Association. Why not add to these via the top link?
Posted by Harry Barnes at 4:55 PM