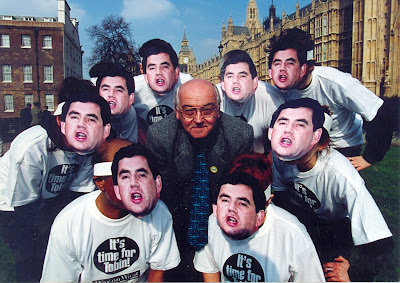 Here I am in ye olde Parliamentary Days campaigning against Gordon Brown's refusal to support the Tobin Tax.

The Secretary of State for Trade and Industry (Ms Patricia Hewitt):

"....James Tobin seems to be rather sceptical about his idea, so we may have to rename the Tobin tax—[Hon. Members: "The Barnes tax."] Indeed, the Barnes tax...".

Financial institutions could still face Tobin taxes as the prime minister seeks international support for such a scheme.

Under the plan, each financial transaction would attract a levy aimed at discouraging irresponsible speculation.

Gordon Brown is himself a recent convert to the idea and he is now looking to achieve international backing for the idea.

Although other European leaders have cautiously welcomed the plans, the US and Canada seem less keen.

Asked about the idea of Tobin taxes, US treasury secretary Tim Geithner said: "No, that's not something that we're prepared to support."

The idea of Tobin taxes was floated by Lord Adair Turner, chairman of the Financial Services Authority, back in August.

However, he admitted that a global consensus on the issue would be needed for the idea to work and that achieving this could prove "very difficult"."
From today's "Accountancy News"

"That this House notes that international currency speculation currently stands at about $1.5 trillion a day and that the vast majority of this is unrelated to trade in real goods and services; further notes that such enormous speculative flows substantially undermine the powers of national governments and regional blocs; believes that a small levy on such speculation, known as the Tobin Tax, after the name of the Nobel Laureate who originated the concept, could both help to dampen down the scale and scope of speculation and raise substantial revenues, raising as much as $250 billion each year for good causes such as development and environmental protection; recognises that such a levy would have to be universal or as near to that as possible and contain safeguards to minimise and eliminate tax evasion; notes that the Tobin Tax has the backing of the Canadian Parliament, the Belgian Parliament, the Finnish Government and campaign groups such as War on Want; and urges the Government to discuss the concept with its partners in international organisations such as the World Trade Organisation, the IMF, G8 and the European Union with a view to drawing up an internationally co-ordinated and feasible tax regime for currency speculation."

This motion was been signed by a total of 145 MPs.

And these are links to a couple of former articles of mine on the topic - here and here.

Of course I wasn't the first or the last to push the issue. But the lesson is that you never give up campaigning for a worthy cause. And this campaign now needs more support then ever to give it even greater momentum. Let us now target the man who has just delivered on Health Services - Obama. Greatness awaits him.
Posted by Harry Barnes at 4:25 PM

I agree that Brown adopting the Tobin tax is a real step forward. I doubt Obama will back it though (hope i'm wrong).

I saw a 'Mr.Duvet' from the Heritage Foundation interviewed about this on Channel 4 News. He was of the opinion that massive multinational banks couldn't survive a 0.05% tax on their transactions - and suggested VAT as an alternative (presumably because it only shafts ordinary people by having no relation to their income, rather than inconveniencing the important people who work in large banks).

I'm afraid that so far Obama looks like he doesn't give a toss about anything but his flagship domestic policies like public healthcare insurance - and will let Hondurans be murdered, continue killing Afghans and forget any meaningful reforms of the international economy in order to avoid antagonising any members of congress.

I may be wrong and i hope he proves me wrong on that, but so far , that's how it seems.

All the best,
Dunc

p.s I love the photo

Calgacus : The fact that Brown moved to advocate the Tobin Tax could be a sign that he has already established some international support for his proposals. Whilst Obama is not on board, perhaps he is not unhappy about the idea making headway under a Brown initiative.

What if we went into the next election with a 1997 style pledge card, but his time one with big ideas on it such as the Tobin Tax? Perhaps we could still take the high ground.

Even if this dosn't happen I am for sticking with Labour in the hope that there are enough of us around to pick up the pieces after an electoral drubbing.